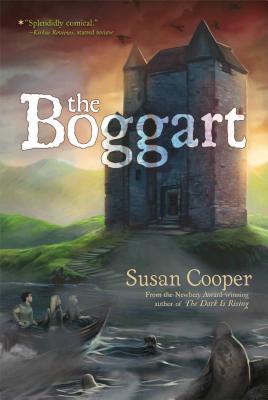 In a tumbledown castle in the Western Highlands of Scotland lives the Boggart. He is invisible -- an ancient mischievous spirit, solitary and sly, born of a magic as old as the rocks and the waves. He has lived in Castle Keep for centuries, playing tricks on the owners. But the last Scottish owner has died and left the castle to his great-nephew Robert Volnik of Toronto, Canada. The Volnik family -- including Emily and her nine-year-old computer genius brother Jessup -- visit Castle Keep, and when they return to Toronto, they unwittingly take the Boggart with them.
The astonishments, delight, and horrors that invade their lives with the arrival of the Boggart fill this swiftly moving story. The collision of modern techology and the Old Magic brings perils nobody could have imagined -- and, in the end, an amazing and touching solution to the problem of the Boggart who has found himself on the wrong side of the ocean.
Sometimes extremely funny, sometimes wildly scary,and always totally absorbing, this remarkable story -- brilliantly imagined and beautifully written -- marks the return of the Newbery Award winner Susan Cooper to the field of novels for young readers. An outstanding achievement, The Boggart will work its special magic on all who read it.

Susan Cooper is one of our foremost children’s authors; her classic five-book fantasy sequence The Dark Is Rising has sold millions of copies worldwide. Her many books have won the Newbery Medal, a Newbery Honor, and the Boston Globe-Horn Book Award, and been shortlisted five times for the Carnegie Medal. She combines fantasy with history in Victory (a Washington Post Top Ten for Children novel), King of Shadows and Ghost Hawk, and her magical The Boggart and the Monster, second in a trilogy, won the Scottish Arts Council’s Children’s Book Award. Susan Cooper lives on a saltmarsh island in Massachusetts, and you can visit her online at TheLostLand.com.

*"The Boggart is a fascinating character, sly, ingenious, and endearing...What is most admirable is Susan Cooper's seamless fusion of the newest technology and one of the oldest forms of wild magic."
— The Horn Book, starred review

*"[T]old with Cooper's usual imagination and grace; the Boogart is entrancing--a magically witty mix of fey spirit, comfort-loving cat, old man set in his ways, and child taking gleeful delight in his own mischief--of which there is plenty, all splendidly comical."
— Kirkus Reviews, starred review

"The intelligently thought-out clash between the ancient folkloric creature and modern science guarantees a wide audience. A lively story, compelling from first page to last, and a good bet for a read-aloud."
— School Library Journal, starred review

"Ms. Cooper's grasp of reality is as firm as her hold on the surreal...as long as writers with Susan Cooper's skill continue to publish, magic is always available."
— The New York Times Book Review