Chew On This: Everything You Don't Want to Know About Fast Food (Paperback) 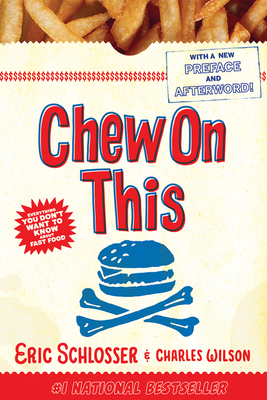 This young readers edition of Eric Schlosser’s best-selling Fast Food Nation tells the fascinating, frightening truth about how the fast food industry has been feeding off children for generations.

Kids love fast food. And the fast food industry definitely loves kids. But where do fast food hamburgers come from? And what makes those fries taste so good? When Eric Schlosser’s best-selling book, Fast Food Nation, was published for adults in 2001, many called for his groundbreaking insight to be shared with young people. Now Schlosser, along with co-writer Charles Wilson, has investigated the subject further, uncovering new facts kids and teens need to know. In Chew On This, they share the fascinating and sometimes frightening truth about what lurks between those sesame seed buns.

Charles Wilson grew up in West Virginia and has written for several newspapers and magazines, including the New York Times and the Washington Post. He has worked on the staff of The New Yorker and the New York Times Magazine and has rounded up beef cattle on horseback at his uncle’s ranch.

Eric Schlosser is a correspondent for The Atlantic. His work has also appeared in Rolling Stone, Vanity Fair, The Nation, and The New Yorker. He has received a National Magazine Award and a Sidney Hillman Foundation Award for reporting.

"Vivid . . . compelling.' —Booklist, starred review Booklist, ALA, Starred Review "A stinging, often startling expose on this country's pervasive, lucrative fast-food industry, for young people." —Publishers Weekly Publishers Weekly "Fascinating -- and alarming. . . . This book is full of inspiring examples of how one person can make a difference." —LA Times The Los Angeles Times "Chew on This is an expose of the fast-food industry and a nauseating disclosure of the fats, sweeteners, laboratory-formulated textures, scents and colors that sizzle under the Golden Arches. Read this, and you have had your last Happy Meal." —The New York Times Book Review "Chew On This should be circulated widely among America's youth. And should be commended for the fact that even in the face of such overwhelmingly bad news, it doesn't completely lose its sense of humor." —The San Francisco Chronicle "With its discussion of alternatives . . . Chew on This puts a nice, empowering spin on the old Burger King jingle, "Have it your way." Along with the all-McDonald's diet movie, "Supersize Me," this should be required fare before the next lunch bell rings." —The Washington Post "Chew On This is an eye-opening book with a worthy message." —Bookpage Bookpage "Useful for health classes and nutrition units, it will also be an eye-opener for general readers who regularly indulge at the Golden Arches. . . .But the emphasis here is on the truth about soda pop and obestity, fries and lies." —School Library Journal "Eye-opening and often stomach-churning...this book is a fascinating look at a very controversial subject." —VOYA (Voice of Youth Advocates) —