Between Shades of Gray (Prebound) 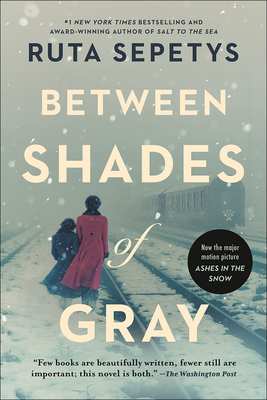 “The full extent of Stalin's genocide will never truly be known, but it certainly had no boundaries. Ruta Sepetys stunningly portrays the devastation of Lithuania through the eyes of 15-year-old Lina and the story of her family's deportation to Siberia. The camp scenes not only accurately display the horror of the Great Terror but also show the courage and resilience of those who survived this colossal crime. Consider this the young adult version of Alexander Solzhenitsyn's One Day in the Life of Ivan Denisovich.”
— Bill Cusumano, Nicola's Books, Ann Arbor, MI

A moving and haunting novel for readers of "The Book Thief"
Fifteen-year-old Lina is a Lithuanian girl living an ordinary life--until Soviet officers invade her home and tear her family apart. Separated from her father and forced onto a crowded train, Lina, her mother, and her young brother make their way to a Siberian work camp, where they are forced to fight for their lives. Lina finds solace in her art, documenting these events by drawing. Risking everything, she imbeds clues in her drawings of their location and secretly passes them along, hoping her drawings will make their way to her father's prison camp. But will strength, love, and hope be enough for Lina and her family to survive?
This powerful tale of heartbreak and hope is sure to haunt readers long after they finish the last page.

Ruta Sepetys was born and raised in Detroit, Michigan. "Between Shades of Gray" is her first novel.