The Epic Story of Every Living Thing (Hardcover) 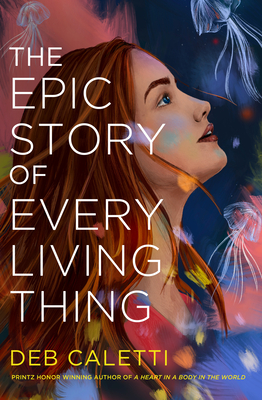 Harper has been raised by a single mother with no idea of her father. When Harper suddenly receives a comment on her latest social media post from a stranger claiming that she looks just like his friend, her curiosity gets the best of her. Snooping soon turns into stalking until Harper realizes she has a half-sibling. After reaching out, Harper is led to two other half-siblings. With no knowledge other than the fact that their father was a sperm donor, the group of siblings do their best to track him down. Months later, the group is able to trace their father down to Hawaii and plan a visit in the summer to surprise/meet him. What they didn't expect was to spend the rest of their summer solving the mystery of a shipwreck.

From the award-winning author of A Heart in a Body in The World comes a gorgeous and fiercely feminist young adult novel. When a teen travels to Hawaii to track down her sperm donor father, she discovers the truth about him, about the sunken shipwreck that’s become his obsession, and most of all about herself.

Harper Proulx has lived her whole life with unanswered questions about her anonymous sperm donor father. She's convinced that without knowing him, she can't know herself. When a chance Instagram post connects Harper to a half sibling, that connection yields many more and ultimately leads Harper to uncover her father's identity.

So, fresh from a painful breakup and still reeling with anxiety that reached a lifetime high during the pandemic, Harper joins her newfound half siblings on a voyage to Hawaii to face their father. The events of that summer, and the man they discover—a charismatic deep-sea diver obsessed with solving the mystery of a fragile sunken shipwreck—will force Harper to face some even bigger questions: Who is she? Is she her DNA, her experiences, her successes, her failures? Is she the things she loves—or the things she hates? Who she is in dark times? Who she might become after them?

Deb Caletti is the award-winning and critically acclaimed author of over sixteen books for adults and young adults, including Honey, Baby, Sweetheart, a finalist for the National Book Award; A Heart in a Body in the World, a Michael L. Printz Honor Book; Girl, Unframed; and One Great Lie. Her books have also won the Josette Frank Award for Fiction, the Washington State Book Award, and numerous other state awards and honors, and she was a finalist for the PEN USA Award. She lives with her family in Seattle.

★ "Through this novel about overcoming fear and expectations, Caletti examines what makes a person—is it their DNA, their lived experiences, or the family who raised them?" —SLJ, starred review

★"[A] heartwarming and authentic story that's packed with a collage of well-researched detail, people, and themes....will find itself right at home in collections with strong contemporary YA."
—Booklist, starred review

"A rich, contemplative story about looking beneath the (literal and figurative) surface to find love, purpose, and joy." —The Horn Book Review