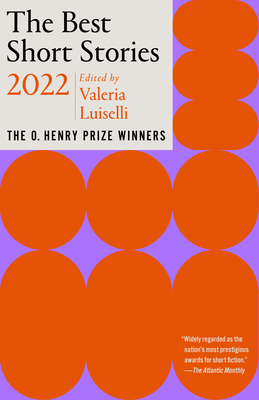 "Widely regarded as the nation's most prestigious awards for short fiction." —The Atlantic Monthly

Continuing a century-long tradition of cutting-edge literary excellence, this year's edition contains twenty prizewinning stories chosen from the thousands published in magazines over the previous year. Guest editor Valeria Luiselli has brought her own refreshing perspective to the prize, selecting stories by an engaging mix of celebrated names and emerging voices and including stories in translation from Bengali, Greek, Hebrew, Norwegian, Polish, Russian, and Spanish. The winning stories are accompanied by an introduction by Luiselli, observations from the winning writers on what inspired them, and an extensive resource list of magazines that publish short fiction. AN ANCHOR BOOKS ORIGINAL.

“Screen Time,” by Alejandro Zambra,
translated from the Spanish by Megan McDowell

“The Wolves of Circassia,” by Daniel Mason

“Mercedes’s Special Talent,” by Tere Dávila,
translated from the Spanish by Rebecca Hanssens-Reed

“A Way with Bea,” by Shanteka Sigers

“Seams,” by Olga Tokarczuk,
translated from the Polish by Jennifer Croft

“The Little Widow from the Capital,” by Yohanca Delgado

“Lemonade,” by Eshkol Nevo,
translated from the Hebrew by Sondra Silverston

“The Old Man of Kusumpur,” by Amar Mitra,
translated from the Bengali by Anish Gupta

“Where They Always Meet,” by Christos Ikonomou,
translated from the Greek by Karen Emmerich

“Horse Soup,” by Vladimir Sorokin,
translated from the Russian by Max Lawton

“Dengue Boy,” by Michel Nieva,
translated from the Spanish by Natasha Wimmer

“Apples,” by Gunnhild Øyehaug,
translated from the Norwegian by Kari Dickson

“Warp and Weft,” by David Ryan

“An Unlucky Man,” by Samanta Schweblin,
translated from the Spanish by Megan McDowell

VALERIA LUISELLI was born in Mexico City and grew up in South Korea, South Africa, and India. She is the author of two essay collections and the novels Faces in the Crowd, The Story of My Teeth, and The Lost Children Archive. The recipient of a MacArthur “Genius Grant,” two Los Angeles Times Book Prizes, an American Book Award, and the 2021 Dublin Literary Award, she has also been nominated twice for the National Book Critics Circle Award and three times for the Kirkus Prize. She is a National Book Foundation “5 Under 35” honoree and the recipient of a Bearing Witness Fellowship from the Art for Justice Fund. Her work has been translated into more than twenty languages.

JENNY MINTON QUIGLEY is the author of a memoir, The Early Birds, and editor of the anthology Lolita in the Afterlife. She lives in West Hartford, Connecticut, with her husband, sons, and dogs.