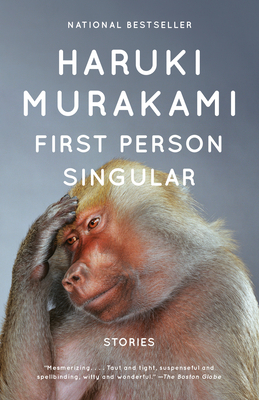 NATIONAL BEST SELLER • A mind-bending new collection of short stories from the internationally acclaimed, best-selling author. • “Some novelists hold a mirror up to the world and some, like Haruki Murakami, use the mirror as a portal to a universe hidden beyond it.” —The Wall Street Journal

The eight stories in this new book are all told in the first person by a classic Murakami narrator. From memories of youth, meditations on music, and an ardent love of baseball, to dreamlike scenarios and invented jazz albums, together these stories challenge the boundaries between our minds and the exterior world. Occasionally, a narrator may or may not be Murakami himself. Is it memoir or fiction? The reader decides.

Philosophical and mysterious, the stories in First Person Singular all touch beautifully on love and solitude, childhood and memory. . . all with a signature Murakami twist.

HARUKI MURAKAMI was born in Kyoto in 1949 and now lives near Tokyo. His work has been translated into more than fifty languages, and the most recent of his many international honors is the Hans Christian Andersen Literature Award, whose previous recipients include Karl Ove Knausgård, Isabel Allende, and Salman Rushdie.

“All fiction is magic. That’s the thought that occurred to me often as I read First Person Singular, the brilliant new book of stories by Haruki Murakami. . . . Whatever you want to call Murakami’s work—magic realism, supernatural realism—he writes like a mystery tramp, exposing his global readership to the essential and cosmic (yes, cosmic!) questions that only art can provoke: What does it mean to carry the baggage of identity? Who is this inside my head in relation to the external, so-called real world? Is the person I was years ago the person I am now? Can a name be stolen by a monkey?. . . . [Murakami allows] his own voice to enter the narratives, creating a confessional tone that reminded me of Alice Munro’s late work. . . . Describing how these stories succeed is like trying to describe exactly why, more than 50 years later, a Beatles song still sounds fresh.”
—David Means, The New York Times Book Review

“First Person Singular marks a blazing and brilliant return to form. . . . Here we have a taut and tight, suspenseful and spellbinding, witty and wonderful group of eight stories. . . . All are told in the first person, most by narrators looking back from the vantage point of middle age on youthful experiences, obsessions, or encounters. And there isn’t a weak one in the bunch. The stories echo with Murakami’s preoccupations. Nostalgia and longing for the charged, evocative moments of young adulthood. Memory’s power and fragility; how identity forms . . . the at once intransigent and fragile nature of the “self.” Guilt, shame, and regret for mistakes made. . . . Music’s power to make indelible impressions. . . . The themes become a kind of meter against which all the stories make their particular, chiming rhythms. . . . This mesmerizing collection would make a superb introduction to Murakami for anyone who hasn’t yet fallen under his spell; his legion of devoted fans will gobble it up and beg for more.”
—Priscilla Gilman, The Boston Globe

“Haruki Murakami is a master of the mesmerizing head-scratcher. His fiction, whether long or short, highlights life's essential strangeness and unfathomability. . . . The eight stories in First Person Singular [. . .] are classic Murakami, filled with multiple recurrent obsessions — jazz, classical music, Beatles, baseball, and memories of perplexing young love. . . . Murakami's plainspoken short stories, like his more complex novels, raise existential questions about perception, memory, and the meaning of it all—though he's the opposite of heavy-handed, and rarely proposes answers. . . . What is it all about, his frequently awestruck and befuddled characters wonder repeatedly—and contagiously. . . . "Confessions of a Shinagawa Monkey" is a standout that will appeal especially to readers enchanted by Murakami's surrealist turns, which blur the line between dreams and reality. . . . [A] winning collection.”
—Heller McAlpin, NPR

“Haruki Murakami often seems most at home in his short-story collections, cycling through his various fixations unburdened by the narrative mechanics of his novels. First Person Singular is no exception, offering ruminations on the fickleness of memory while fleeting from baseball to Beatlemania to a Kafka-inspired talking monkey.”
—Chris Stanton, Vulture

“For new readers, First Person Singular is a crash course in appreciating Murakami. . . . [These stories] are steeped in the love of music—especially of jazz, classical and the Beatles—that reverberates throughout his work. There is a piece on his famous passion for baseball (it was supposedly while watching a game that he was inspired to become a writer) and another that includes the return of a talking monkey he first wrote about 15 years ago. Most of all, though, these stories are unmistakably Murakami’s for the way they traffic in his signature themes of time and memory, nostalgia and young love. They are characterized, like so much of his writing, by the collision of everyday realism with the surreal and the sublime.”
—Alexander Nurnberg, The Times (UK)

“Murakami has woven a lifelong obsession with music into his writing, including in his stunning First Person Singular. . . . The pieces here tap the author’s infatuations with the Beatles and Mozart, baseball and poetry, transgressive sex and fleeting romance, served up with dollops of American pop culture. It’s all here, narrated in a range of voices, from deadpan poet to magical realist to song critic. Duke Ellington, Charlie Parker, and other jazz greats pop up throughout. . . . But his tastes are wide-ranging: the Beatles make a cameo as well, and the author’s passion for classical music fuels the subtle, stirring “Carnaval”. . . . Murakami’s encyclopedic knowledge of music surges to the fore, echoed in vivid imagery.”
—Hamilton Cain, Oprah Daily

“First Person Singular will satisfy [Murakami’s] fans and serve as a fine introduction to neophytes, echoing many of the uncanny scenarios of his earlier work. . . . In “Cream,” the opening story of the collection, a lovesick young man goes to a piano recital located in the mountains of Kobe, only to find no one there. In unsettling episodes that one might find in a Flannery O’Connor story, he encounters a car broadcasting a Christian message that everyone will die and be judged harshly for their sins. . . . The collection’s Kafkaesque titular story is the strongest because of its notable timeliness. . . . These eight stories, all told in first person, are unapologetically Murakami . . . [and] will remind readers why Murakami’s work is singular.”—Leland Cheuk, The Washington Post

“To step into First Person Singular is to cross from our present moment and into a lost country demarcated by old memories. . . . [The story] “Confessions of a Shinagawa Monkey” is as fun as anything I’ve read during this pandemic lockdown. . . . The collection ends, brilliantly, with an interrogation. A man sits at a bar and a stranger begins to berate him about an event he has no memory of. . . . For all our reminiscing, Murakami seems to say, it’s the things we don’t remember that might haunt us the most. After all, memory is itself another liminal space, one where we experience both now and then at the same time. Likewise, finishing First Person Singular requires thinking back to everything we’ve just read about these characters’ lives, and to everything we didn’t.”—Andrew Ervin, The Brooklyn Rail

“[Murakami is] first and foremost a remarkably accessible storyteller. His books are an intimate invitation to revel in his perpetually unpredictable, yet remarkably convincing, imagination. . . . Murakami writes with such assurance as to turn the implausible credible, the outlandish engrossing. Each story enthralls.”—Terry Hong, Christian Science Monitor
“I’m four stories into the eight that make up First Person Singular, and I can’t stop thinking about their beauty, their charm, and their weirdness.”
—Patrick Rapa, The Philadelphia Inquirer

“The stories in Haruki Murakami's new collection, First Person Singular, have a sort of fractal nature—you're reading a story by a middle-aged Japanese man in which a middle-aged Japanese man is telling you a story (and sometimes that story involves him telling other stories). You get drawn into the spiral, and soon you're in that strange world where many of his stories exist, a place full of his favorite things (jazz, baseball, the Beatles, though surprisingly few cats this time) and yet unmistakably odd, existing at a slight, unexplained angle to reality.”
—Petra Mayer, NPR

"Murakami’s engrossing collection offers a crash course in his singular style and vision, blending passion for music and baseball and nostalgia for youth with portrayals of young love and moments of magical realism . . . Murakami’s gift for evocative, opaque magical realism shines in “Charlie Parker Plays Bossa Nova,” in which a review of a fictional album breathes new life into the ghost of the jazz great, and “Confessions of a Shinagawa Monkey,” wherein a talking monkey ruminates with a traveler on love and belonging. Murakami finds ample material in young love and sex, showcased in “On a Stone Pillow,” in which a young man’s brief tryst with a coworker, unremarkable in itself, takes on a degree of immortality after she mails him her poetry . . . These shimmering stories are testament to Murakami’s talent and enduring creativity."
—Publishers Weekly (Starred Review)

“Whether in his epic-scale novels or in his shorter works, much of Murakami's appeal has always come from the beguiling way in which his characters react to wildly fantastical events in the most matter-of-fact manner, ever ready to accept how the twists and turns of everyday life can blend into more audacious alternate realities. In these eight stories, we see that phenomenon most disarmingly in "Confessions of a Shinagawa Monkey," in which a monkey strides into a sauna at a remote hotel and asks the narrator if he would like to have his back scrubbed . . . The glue that holds together Murakami's blending realities—in these stories and, indeed, in all of his fiction—is always the narrator's love for something (a woman, a song, a baseball team, a moment in the past) that is both life-giving and deeply melancholic. Masterful short fiction.”
—Bill Ott, Booklist (Starred Review)

“You can’t have a conversation about literary fiction of the past 50 years without mentioning Haruki Murakami, and First Person Singular reminds us why. . . . As one of the standard-bearers of contemporary magical realism, Murakami has traveled deep into the hearts and minds of both his characters and his readers. In First Person Singular, he offers eight new stories, all told in first person—hence the title—as perhaps memoir, perhaps fiction. For example, “The Yakult Swallows Poetry Collection” finds a baseball-loving writer named Haruki Murakami musing on his favorite team and the ties that bind us together. Murakami is always blurring lines, and here it’s left up to the reader to decide what’s real. By distorting reality, the author creates a special closeness to his audience, and he acknowledges this relationship with intelligence and grace.”
—Eric Ponce, BookPage

"A new collection of stories from the master of the strange, enigmatic twist of plot . . . Music is never far from a Murakami yarn, though always with an unexpected turn: Charlie Parker comes in a dream to tell one young man that death is pretty boring and meaningless . . . Murakami’s characters are typically flat of affect, protesting their ugliness and ordinariness, and puzzled or frightened by things as they are. But most are also philosophical even about those ordinary things, as is the narrator of that fine Beatles-tinged tale, who ponders why it is that pop songs are important and informative in youth, when our lives are happiest . . . An essential addition to any Murakami fan’s library."
—Kirkus (Starred Review)

“The versatile and prolific Murakami collects eight first-person stories that affirm his obsessions—American pop music and magical realism, baseball and sex—yet break new literary ground. From a messy hookup to an imaginary Charlie Parker album to a monkey masseur, the Japanese maestro taps the weirdness of the everyday, exposing conflicts that simmer within us all.”
—Oprah Daily