Happy for You: A Novel (Hardcover) 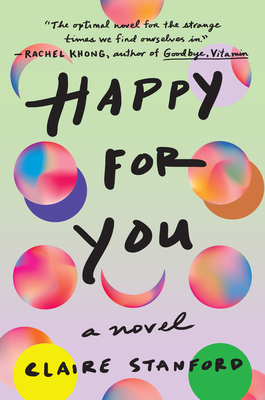 NAMED A MOST ANTICIPATED BOOK OF 2022 BY GLAMOUR, ELECTRIC LIT, AND THE MILLIONS

“Engrossing and clever . . . Stanford captures the allure, absurdity and menace of corporate spaces with wit and levity . . . Anyone who has resisted fitting neatly into an algorithm will find a companion in Evelyn, and in this book.” —The New York Times Book Review

“The optimal novel for the strange times we find ourselves in.” —Rachel Khong, author of Goodbye, Vitamin

A whip-smart, funny, affecting novel about a young woman who takes a job at a tech company looking to break into the “happiness market”—even as her own happiness feels more unknowable than ever

Four years into writing her still-unfinished philosophy dissertation, and anticipating a marriage proposal from her long-term boyfriend, Evelyn Kominsky Kumamoto is wrestling with big questions about life: How can she do meaningful work in the world? Is she ready for marriage—and motherhood? But no one else around her seems to share her ambivalence. Her relentlessly optimistic, Midwestern boyfriend has no hesitation about making a lifelong commitment; her best friend, Sharky, seems to have wholeheartedly embraced his second-choice career as a trend forecaster; and her usually reserved father has thrown himself headlong into a new relationship—his first since her mother’s passing when Evelyn was fourteen.

Swallowing her doubts, Evelyn makes a leap, leaving academia for a job as a researcher at the third-most popular internet company, where her team is tasked with developing an app that will help users quantify and augment their happiness. Confronting Silicon Valley’s norm-reinforcing algorithms and predominantly white culture, she struggles to find belonging: as a biracial person, as an Asian American, and as someone who doesn’t know how to perform social media’s vision of what womanhood should look like. As her misgivings mount, an unexpected development upends her assumptions about her future, and Evelyn embarks on a journey toward an authentic happiness all her own.

Wry, touching, and sharply attuned to the ambivalence, atomization, and illusion of control that characterize modern life, Happy for You is a story of a young woman at a crossroads that movingly explores how, even in this mediated world, our emotions, contradictions, and vulnerabilities have a transformative power we could never predict.

Claire Stanford’s fiction and essays have appeared in The Rumpus, Tin House Flash Fridays, Black Warrior Review, Los Angeles Review of Books, The Millions, and other publications. She received her MFA from the University of Minnesota, and her work has received fellowships from the Jerome Foundation and the Minnesota State Arts Board. Born and raised in Berkeley, she currently lives in Reno, where she is an assistant professor of English at the University of Nevada, Reno.

“Engrossing and clever . . . Stanford captures the allure, absurdity and menace of corporate spaces with wit and levity . . . the third act of the book delivers emotional resolve and warmth . . . Stanford rewards the reader with many thought-provoking and eerie moments . . . Anyone who has resisted fitting neatly into an algorithm will find a companion in Evelyn, and in this book.” —The New York Times Book Review

“If you enjoyed Fake Accounts by Lauren Oyler, read Happy for You by Claire Stanford . . . [A] snappy addition to the office novel canon.” —The Washington Post

“While Stanford’s portrait of a tech company is funny, trenchant, and exactly as barbed as it should be about life in Big Tech, Happy for You is up to something else. The novel is really a meditation on happiness wrapped inside a Silicon Valley satire. It succeeds on the strength of its characterization of Evelyn, who is at a crossroads in her personal life and intent on living inside the emotional nuances her workplace is intent on stamping out.” —WIRED

“Through the lens of norm-reinforcing social media, Happy for You weaves a scathing send-up of Silicon Valley and a meditation on how human emotionality defies automation.” —Esquire

“Get ready to be as drawn into this story as you would be to any shiny, user-friendly ‘five minutes a day to more happiness!’ app.” —Glamour, “The Best Books of 2022 to Add to Your Reading List”

“A resonant meditation on what it means to be happy in an increasingly tech-saturated world . . . At turns thoughtful, funny, and startling, Stanford’s writing perfectly captures her protagonist’s aimlessness.” —Publishers Weekly

“A rumination on modern happiness . . . [with] an emotional twist in the later chapters . . . The myriad ways [Evelyn’s] biracial identity causes friction throughout the novel provide moments of wit and insight.” —Kirkus Reviews

“Philosophical, tender, and full of dazzling observations, Claire Stanford has written a fiercely insightful portrait of interiority in the time of self-optimizing apps and social media. Reading it is an awakening, a brisk infusion of life and feeling.” —Alexandra Kleeman, author of Something New Under the Sun

“A penetrating debut that asks not just what is happiness, but what it means to be whole.  A striking exploration of the mind, the computer, of human behavior, animal behavior, and the emotions, from the brightest joys to the deepest sorrows, that connect us all.” —Weike Wang, author of Joan is Okay

“Happy for You is the optimal novel for the strange times we find ourselves in. In prose that’s at once droll, incisive, and moving, Claire Stanford covers a murderer’s row of twenty-first century preoccupations: technology, privacy, and contentment in the time of capitalism. This is a book for anyone who’s ever looked around at this brave new world—and wondered about your own place in it.” —Rachel Khong, author of Goodbye, Vitamin

“For fans of Uncanny Valley, this is a clever and introspective debut about an ambivalent tech worker's search for a meaningful life in a culture obsessed with happiness. This novel is for anyone with mixed feelings about all the data we provide Big Tech, all the search terms we type into Google, looking to answer the same question that haunts Evelyn: 'Am I alone? Am I the only one?'” —Leigh Stein, author of Self Care

“I felt happy for me, reading Happy for You. Claire Stanford tells the story of a young woman's quest for a meaningful life—for life at all—in this digital world. Whether she can find the joys and sorrows of the body—the physical, sexual body—makes for a compelling and insightful read.” —Maxine Hong Kingston, author of The Woman Warrior

“Turn off your phone, shut down your computer, and immerse yourself in Happy for You. In this very smart and timely novel, Claire Stanford poses questions about how we define and understand ourselves—as opposed to how we allow social media and technology to define and portray us. A thought-provoking, comic, and marvelously unsettling debut.” —Julie Schumacher, author of Dear Committee Members and The Shakespeare Requirement

“A novel of fine intelligence, Happy for You is a witty send-up of our algorithm culture that builds to an unexpected and quite beautiful depth of feeling. A terrific debut.” —Charles Baxter, author of The Sun Collective