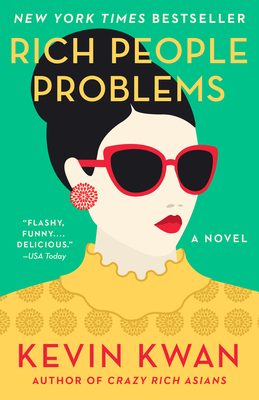 This is book number 3 in the Crazy Rich Asians Trilogy series.

From the New York Times bestselling author of Crazy Rich Asians (the basis for the acclaimed major motion picture) and China Rich Girlfriend, here is the uproarious conclusion to the Crazy Rich Asians trilogy.

When Nicholas Young hears that his grandmother, Su Yi, is on her deathbed, he rushes to be by her bedside—but he's not alone. The entire Shang-Young clan has convened from all corners of the globe to stake claim on their matriarch’s massive fortune. With each family member vying to inherit Tyersall Park—a trophy estate on 64 prime acres in the heart of Singapore—Nicholas’s childhood home turns into a hotbed of speculation and sabotage.

As her relatives fight over heirlooms, Astrid Leong is at the center of her own storm, desperately in love with her old sweetheart Charlie Wu, but tormented by her ex-husband—a man hell bent on destroying Astrid’s reputation and relationship. Meanwhile Kitty Pong, married to China’s second richest man, billionaire Jack Bing, still feels second best next to her new step-daughter, famous fashionista Colette Bing.

A sweeping novel that takes us from the elegantly appointed mansions of Manila to the secluded private islands in the Sulu Sea, from a kidnapping at Hong Kong’s most elite private school to a surprise marriage proposal at an Indian palace, caught on camera by the telephoto lenses of paparazzi, Kevin Kwan's hilarious, gloriously wicked new novel reveals the long-buried secrets of Asia's most privileged families and their rich people problems.

Kevin Kwan is the author of the international bestsellers Crazy Rich Asians, soon to be a major motion picture, and China Rich Girlfriend. Born in Singapore, he has called New York’s West Village home since 1995. For the latest news and information, please visit:

“Flashy, funny... Delicious, the juicy stuff of classic high-society drama... Rich People Problems is a fun tabloid romp full of over-the-top shenanigans, like a society party brawl that ruins both a Ramon Orlina glass sculpture of the hostess’s breasts and ‘a special pig that had only eaten truffles its entire life and was flown in from Spain...’ A memorable, laugh-out-loud Asian glitz fest that’s a pure pleasure to read.” —Steph Cha, USA Today

“I gobbled all three volumes of Kevin Kwan’s gossipy, name-droppy and wickedly funny Crazy Rich Asians trilogy as if they were popcorn. (Really fresh, still-warm popcorn, with that good European butter… but I digress.) The novels, set among three intergenerational and ultrarich Chinese families and peppered with hilarious explanatory footnotes, are set mostly in Singapore but flit easily from one glamorous world city to another… Irresistible.” –Moira Macdonald, The Seattle Times

“Kevin Kwan has done it again. The mastermind behind the delicious Crazy Rich Asians series has drawn a cult-like following with his extravagant tales of Asia’s upper echelon. He’s back at with the series’s final installment, Rich People Problems (rest assured, it’s just as enthralling as the trilogy’s first two volumes).” –Isabel Jones, InStyle

“[A] hilarious family drama… This delightfully wicked family saga will have you laughing over your summer daiquiris at the long-buried secrets of Asia’s most privileged families and their rich people problems.” —Redbook Magazine, “20 Summer Beach Reads to Stock Up On Now”

“There are a lot of lines in Kevin Kwan’s forthcoming novel Rich People Problems that will make you both roll your eyes and chuckle at the pure absurdity of the characters… Pure entertainment. Think: Bravo’s ‘Housewives’ but with a lot more money and, as a result, a lot more drama.” —Taylor Bryant, Nylon

“Thank god for Kwan... In Rich People Problems—Kwan’s third installment in his Crazy Rich Asians series—even more insane family hijinks unfold when greed and jealousy get fortune-hungry schemers up in a wild tizzy. Catch up on the whole saga before the film’s release.” –W Magazine