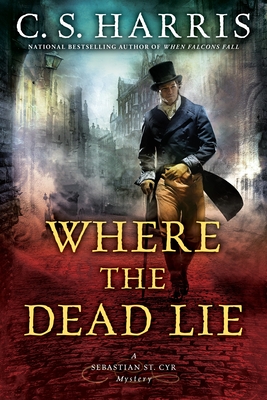 This is book number 12 in the Sebastian St. Cyr Mystery series.

In this historical mystery from the national bestselling author of Who Slays the Wicked, the abduction and murder of a young boy takes Sebastian St. Cyr from the gritty streets of London to the glittering pleasure haunts of the aristocracy...

London, 1813. One of the city's many homeless children, Benji Thatcher was abducted and murdered—and his younger sister is still missing. Few in authority care about a street urchin's fate, but Sebastian St. Cyr, Viscount Devlin, refuses to let this killer go unpunished.

Uncovering a disturbing pattern of missing children, Sebastian is drawn into a shadowy, sadistic world. As he follows a grim trail that leads from the writings of the debauched Marquis de Sade to the city's most notorious brothels, he comes to a horrifying realization: Someone from society's upper echelon is preying upon the city's most vulnerable. And though dark, powerful forces are moving against him, Sebastian will risk his reputation and his life to keep more innocents from harm...

C. S. Harris is the national bestselling author of more than twenty novels, including the Sebastian St. Cyr Mysteries, featuring When Falcons Fall, Who Buries the Dead, Why Kings Confess, and What Darkness Brings; as C. S. Graham, a thriller series coauthored by former intelligence officer Steven Harris; and seven award-winning historical romances written under the name Candice Proctor.

Praise for Where the Dead Lie

“C.S. Harris really is a master of storytelling. Each book in the Sebastian St. Cyr series is a tense, tightly plotted and atmospherically executed read. Full of period correct detail and fascinating, complex characters, there is never a dull moment or wasted word...This is definitely one of my best reads of the year.”—Open Book Society

“Fantastic...Her attention to detail richly evokes the feel of the time period but is never overdone. Harris' characters are lushly drawn in all their glorious complexity...a satisfying historical mystery that is engrossing 'til the last page is turned.”—Fresh Fiction

“A winner!...Atmospheric and immediately engaging...A wonderful read capable of being enjoyed as a stand-alone.”—Historical Novel Society

“This latest installment in Harris's well-researched historical series features a charismatic lead who's unafraid of exposing the inner workings of a controlling authority when it turns against its own people.”—Library Journal