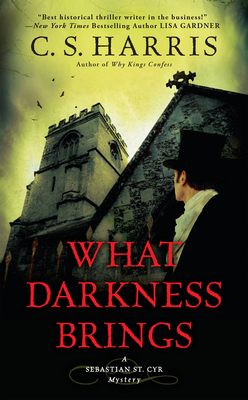 This is book number 8 in the Sebastian St. Cyr Mystery series.

In this mystery in the Sebastian St. Cyr series, the aristocratic investigator is drawn into a sordid world of greed, desperation, and the occult when the husband of his former lover is accused of murder.

Regency England, September 1812: After a long night spent dealing with the tragic death of a former military comrade, a heart-sick Sebastian learns of a new calamity: Russell Yates, the dashing, one-time privateer who married Kat Boleyn a year ago, has been found standing over the corpse of Benjamin Eisler, a wealthy gem dealer. Yates insists he is innocent, but he will surely hang unless Sebastian can unmask the real killer.

For the sake of Kat, the woman he once loved and lost, Sebastian plunges into a treacherous circle of intrigue. Although Eisler’s clients included the Prince Regent and the Emperor Napoleon, he was a despicable man with many enemies and a number of dangerous, well-kept secrets—including a passion for arcane texts and black magic. Central to the case is a magnificent blue diamond, believed to have once formed part of the French crown jewels, which disappeared on the night of Eisler’s death. As Sebastian traces the diamond’s ownership, he uncovers links that implicate an eccentric, powerful financier named Hope and stretch back into the darkest days of the French Revolution.

When the killer grows ever more desperate and vicious, Sebastian finds his new marriage to Hero tested by the shadows of his first love, especially when he begins to suspect that Kat is keeping secrets of her own. And as matters rise to a crisis, Sebastian must face a bitter truth—that he has been less than open with the fearless woman who is now his wife.

C.S. Harris has written more than a twenty novels, including the Sebastian St. Cyr mystery series; the C.S. Graham thriller series, co-authored with former intelligence officer Steven Harris; and seven award-winning historical romances written under the name Candice Proctor. A respected scholar of nineteenth century Europe, she is also the author of a nonfiction historical study of the French Revolution. She lives in New Orleans with her husband and two daughters.

“A crescendo of suspense and surprise.”—Library Journal (starred review)