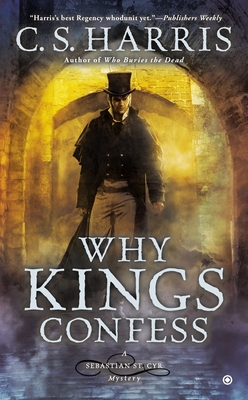 This is book number 9 in the Sebastian St. Cyr Mystery series.

Regency England, January 1813: The mutilated body of a young French doctor found in an alley beside a mysterious, badly injured woman entangles Sebastian in the deadly riddle of the “Lost Dauphin,” the boy prince who disappeared during the darkest days of the French Revolution.

Thrust into dangerous conflict with the Dauphin’s sister—the imperious, ruthless daughter of Marie Antoinette—Sebastian finds his self-control shattered when he recognizes the injured woman as Alexi Sauvage, a figure from his own past associated with an act of wartime brutality and betrayal that nearly destroyed him.

With the murderer striking ever closer, Sebastian fears for the lives of his pregnant wife, Hero, and their soon-to-be-born child. And when he realizes the key to their survival may lie in the hands of an old enemy, he must finally face the truth about his own guilt in an incident he has found too terrible to consider....

C. S. Harris has written more than twenty novels. Why Kings Confess is the ninth book in the Sebastian St. Cyr Mystery series, following What Darkness Brings, When Maidens Mourn, and Where Shadows Dance. Harris is also the author of the C. S. Graham thriller series coauthored with former intelligence officer Steven Harris, including The Babylonian Codex, The Solomon Effect, and The Archangel Project, and, writing as Candice Proctor, is the author of seven award-winning historical romances, including Beyond Sunrise and Midnight Confessions. A respected scholar of nineteenth-century Europe, she is also the author of a nonfiction historical study of the French Revolution entitled Women, Equality, and the French Revolution. She lives in New Orleans with her husband and has two daughters.

Praise for Why Kings Confess

“Harris's best Regency whodunit yet...[She] melds mystery and history as seamlessly as she integrates developments in her lead’s personal life into the plot.”—Publishers Weekly (Starred Review)

“Harris’s novel shows an intimate knowledge of both the political and social history of Regency England.…The history, characters, mystery, and atmosphere all draw the reader in and don’t let go.”—RT Book Reviews (Top Pick)