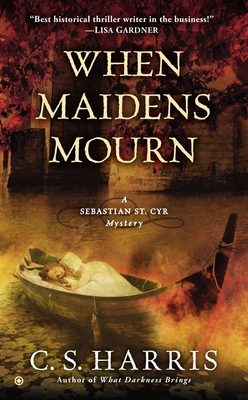 This is book number 7 in the Sebastian St. Cyr Mystery series.

Regency England, August 1812: Sebastian St. Cyr’s plans to escape the heat of London for a honeymoon with his new bride, Hero Jarvis, are shattered when the murdered body of Hero’s good friend Gabrielle Tennyson is discovered drifting in a battered boat at the site of a long-vanished castle known as Camlet Moat. Missing and also presumed dead are Gabrielle’s two young cousins.

Still struggling to define the nature of their new marriage, Sebastian and Hero find themselves occasionally working at cross-purposes as their investigation uncovers dark secrets at the heart of the Tennyson family and an enigmatic young French lieutenant who is concealing mysteries of his own.

Sebastian and Hero’s race to unmask a ruthless killer and unravel the puzzle of the missing children puts both their lives and their growing love for each other at risk as they’re threatened by powerful men in high places…and by a tall, dark stranger who may hold the key to Sebastian’s own parentage.

C. S. Harris is a historian who lives in New Orleans. Writing as Candice Proctor, she is also the author of seven award-winning historical romances. Under the name C. S. Graham, she coauthors contemporary thrillers with her husband, former intelligence officer Steven Harris. She has two daughters.

“A crescendo of suspense and surprise.”—Library Journal (Starred Review)