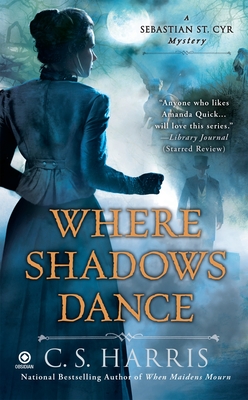 This is book number 6 in the Sebastian St. Cyr Mystery series.

Regency London: July 1812. How do you set about solving a murder no one can reveal has been committed? That’s the challenge confronting C.S. Harris’s aristocratic soldier-turned-sleuth Sebastian St. Cyr when his friend, surgeon and “anatomist” Paul Gibson, illegally buys the cadaver of a young man from London’s infamous body snatchers. A rising star at the Foreign Office, Mr. Alexander Ross was reported to have died of a weak heart. But when Gibson discovers a stiletto wound at the base of Ross’s skull, he can turn only to Sebastian for help in catching the killer.

Described by all who knew him as an amiable young man, Ross at first seems an unlikely candidate for murder. But as Sebastian’s search takes him from the Queen’s drawing rooms in St. James’s Palace to the embassies of Russia, the United States, and the Turkish Empire, he plunges into a dangerous shadow land of diplomatic maneuvering and international intrigue, where truth is an elusive commodity and nothing is as it seems.

C. S. Harris is the national bestselling author of more than two dozen novels, including the Sebastian St. Cyr Mysteries, featuring Where the Dead Lie, When Falcons Fall, Who Buries the Dead, Why Kings Confess, and What Darkness Brings; as C. S. Graham, a thriller series coauthored by former intelligence officer Steven Harris; and seven award-winning historical romances written under the name Candice Proctor.