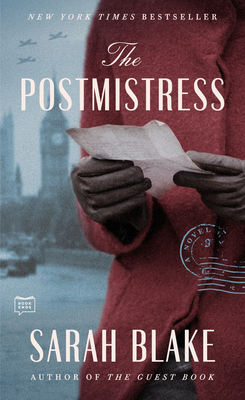 “This compelling story is the perfect answer to that request, 'I want a really good book I can get lost in!' This WWII story of three memorable women has a strong sense of place -- from the shores of Cape Cod to war-torn London. The reader will relish every word and then want to pass it along to a friend.”
— Elizabeth Merritt, Titcomb's Bookshop, East Sandwich, MA

Experience World War 2 through the eyes of two very different women in this captivating New York Times bestseller by the author of The Guest Book.

In 1940, Iris James is the postmistress in coastal Franklin, Massachusetts. Iris knows more about the townspeople than she will ever say, and believes her job is to deliver secrets. Yet one day she does the unthinkable: slips a letter into her pocket, reads it, and doesn't deliver it.

Meanwhile, Frankie Bard broadcasts from overseas with Edward R. Murrow. Her dispatches beg listeners to pay heed as the Nazis bomb London nightly. Most of the townspeople of Franklin think the war can't touch them. But both Iris and Frankie know better...

The Postmistress is a tale of two worlds-one shattered by violence, the other willfully naïve—and of two women whose job is to deliver the news, yet who find themselves unable to do so. Through their eyes, and the eyes of everyday people caught in history's tide, it examines how stories are told, and how the fact of war is borne even through everyday life.

Sarah Blake is the author of the novels The Guest Book, Grange House, and the New York Times bestseller The Postmistress. She lives in Washington, D.C., with her husband and two sons.

Praise for The Postmistress

“Some novels we savor for their lapidary prose, others for their flesh and blood characters, and still others for a sweeping narrative arc that leaves us light- headed and changed; Sarah Blake's masterful, The Postmistress, serves us all this and more. Compassionate, insightful, and unsentimental, this masterful novel is told in a rare and highly successful omniscient voice, one that delves deeply into the seemingly random nature of love and war and story itself. This is a superb book!”—Andre Dubus III, author of House of Sand and Fog

“The Postmistress is the fictional communique readers have waited for. Sarah Blake has brought small-town American life and ravaged Europe during WWII to us with cinematic immediacy. The romantic, harrowing—and utterly inimitable—story of radio journalist Frankie Bard (appalled yet intoxicated by tragedy as no character I've ever read before) contains the uncompromised sensibility found in the writings of Martha Gellhorn. The Postmistress belongs in what Gellhorn called ‘the permanent and necessary’ library.”—Howard Norman, author of The Bird Artist and Devotion

“Great books give you a feeling that you miss all day until you finally get to crawl back inside those pages again. The Postmistress is one of those rare books. When I wasn't reading it, I was thinking about it. Sarah Blake seamlessly moves from inside one character to another, in a novel that reminds us of a time when the news travelled from post to paper to radio and that is how we learned about the world. The Postmistress made me homesick for a time before I was even born. What's remarkable, however, is how relevant the story is to our present-day times. A beautifully written, thought provoking novel that I'm telling everyone I know to read.”—Kathryn Stockett, author of The Help

“An unforgettable, insightful, and compelling novel The Postmistress engages the reader's instincts at the deep level of fight or flight. For WWII radio reporter Frankie Bard, however, the gut response to horror is see and tell. Sarah Blake's prose perfectly recreates the cadences of passion and of the inner life while also conjuring up the wrenching, nightmare suspense of history in the making.”—Sena Jeter Naslund, author of Ahab's Wife and Abundance

“To open Blake's novel of World War II and the convergence of three strong women is to enter a slipstream, so powerful are its velocity, characters, and drama....Matching harrowing action with reflection, romance with pathos, Blake's emotional saga of conscience and genocide is poised to become a best-seller of the highest echelon.”—Booklist (starred review)

“Even readers who don't think they like historical novels will love this one and talk it up to their friends. Highly recommended for all fans of beautifully wrought fiction.”—Library Journal (starred review)