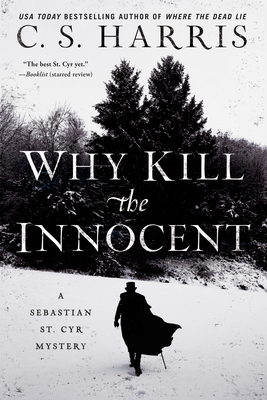 This is book number 13 in the Sebastian St. Cyr Mystery series.

In this paperback reprint, a brutal murder draws nobleman Sebastian St. Cyr into the tangled web of the British royal court in this gripping historical mystery from the national bestselling author of Where the Dead Lie.

London, 1814. As a cruel winter holds the city in its icy grip, the bloody body of a beautiful young musician is found half-buried in a snowdrift. Jane Ambrose's ties to Princess Charlotte, the only child of the Prince Regent and heir presumptive to the throne, panic the palace, which moves quickly to shut down any investigation into the death of the talented pianist. But Sebastian St. Cyr, Viscount Devlin, and his wife, Hero, refuse to allow Jane's murderer to escape justice.

Untangling the secrets of Jane's world leads Sebastian into a maze of dangerous treachery where each player has his or her own unsavory agenda and no one can be trusted. As the Thames freezes over and the people of London pour onto the ice for a Frost Fair, Sebastian and Hero find their investigation circling back to the palace and building to a chilling crescendo of deceit and death . . .

C. S. Harris is the national bestselling author of more than twenty novels, including the Sebastian St. Cyr mysteries (Where the Dead Lie, When Falcons Fall, Who Buries the Dead, Why Kings Confess, What Darkness Brings); as C. S. Graham, a thriller series coauthored by former intelligence officer Steven Harris; and seven award-winning historical romances written under the name Candice Proctor.

Praise for Why Kill the Innocent

“The mystery highlights the circumscribed course of women’s lives of the Regency era while exposing the rot that underlies the period’s glitter…. Highly recommended for lovers of historical thrillers.”—Library Journal, starred review


Praise for When Falcons Fall

“Harris’ talent for character development, polished prose, and accurate, Regency-era details makes this eleventh or any of the previous 10 an easy starting point for newcomers to the Sebastian St. Cyr series...Psychologically atmospheric like Imogen Robertson’s Westerman and Crowther mysteries, with the skewering social wit of Anne Perry's Charlotte and Thomas Pitt novels, this is historical mystery at its best.”—Booklist (starred review)

“An engrossing tangled mystery and astonishing tale about a tragic search for identity. An excellent choice for St. Cyr fans and readers of historical mysteries.”—Library Journal