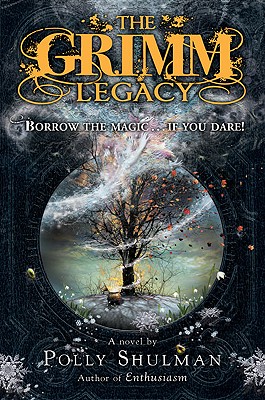 “Elzabeth's new after-school job at a lending library of artifacts turns magical when she's introduced to the ground floor, and the Grimm Collection. Among the shoes of the Twelve Dancing Princesses and the Mirror of Snow White's evil Step-Mother, Elizabeth finds herself caught up in a mystery that could turn dangerous.”
— Meaghan Beasley, Island Bookstore, Kitty Hawk, NC

Elizabeth has a new job at an unusual library—a lending library of objects, not books. In a secret room in the basement lies the Grimm Collection. That’s where the librarians lock away powerful items straight out of the Brothers Grimm fairy tales: seven-league boots, a table that produces a feast at the blink of an eye, Snow White’s stepmother’s sinister mirror that talks in riddles.

When the magical objects start to disappear, Elizabeth embarks on a dangerous quest to catch the thief before she can be accused of the crime—or captured by the thief.

Polly Shulman has created a contemporary fantasy with a fascinating setting and premise, starring an ordinary girl whose after-school job is far from ordinary—and leads to a world of excitement, romance and magical intrigue.

Polly Shulman has written about edible jellyfish, Egyptian tombs, infinity, blind dates, books, brains, centenarians, circuses, and cinematic versions of Jane Austen novels, for The New York Times, Discover, Newsday, Salon, Slate, Scientific American, Archaeology, and The Village Voice, among others. She edits news stories about fossils, meteors, the ocean, the weather, and the planets for Science magazine. She collects Victorian jewelry made of human hair, puts cayenne pepper in her chocolate cookies, and reads forgotten books with frontispieces.

She is an alumna of Hunter College High School, Hampshire College Summer Studies in Mathematics, and Yale University, where she majored in math. She has never dared to crash a dance, but in tenth grade she did write a proof for math class in the form of a sonnet. She grew up in New York City, where she lives with her husband, Andrew Nahem, and their parakeet, Olive.