The Belief Instinct: The Psychology of Souls, Destiny, and the Meaning of Life (Hardcover) 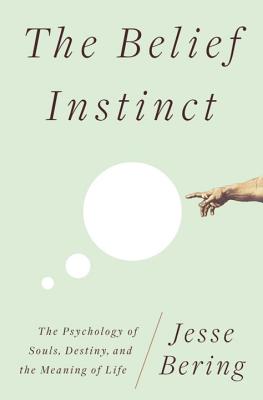 By Jesse Bering
Email or call for price.
Out of Print

Top 25 Books of 2011 by the American Library Association, Choice Reviews

"A balanced and considered approach to this often inflammatory topic." —Nature

Why is belief so hard to shake? Despite our best attempts to embrace rational thought and reject superstition, we often find ourselves appealing to unseen forces that guide our destiny, wondering who might be watching us as we go about our lives, and imagining what might come after death.

In this lively and masterfully argued new book, Jesse Bering unveils the psychological underpinnings of why we believe. Combining lucid accounts of surprising new studies with insights into literature, philosophy, and even pop culture, Bering gives us a narrative that is as entertaining as it is thought-provoking. He sheds light on such topics as our search for a predestined life purpose, our desire to read divine messages into natural disasters and other random occurrences, our visions of the afterlife, and our curiosity about how moral and immoral behavior are rewarded or punished in this life.

Bering traces all of these beliefs and desires to a single trait of human psychology, known as the "theory of mind," which enables us to guess at the intentions and thoughts of others. He then takes this groundbreaking argument one step further, revealing how the instinct to believe in God and other unknowable forces gave early humans an evolutionary advantage. But now that these psychological illusions have outlasted their evolutionary purpose, Bering draws our attention to a whole new challenge: escaping them.

Thanks to Bering's insight and wit, The Belief Instinct will reward readers with an enlightened understanding of the universal human tendency to believe-and the tools to break free.

Jesse Bering, Ph.D., is a frequent contributor to Scientific American, Slate, and Das Magazin. His work has also appeared in New York Magazine, The Guardian, and The New Republic, and has been featured on NPR, the BBC, Playboy Radio, and more. Bering is the former director of the Institute of Cognition and Culture at Queen's University, Belfast, and began his career as a professor at the University of Arkansas. He lives near Ithaca, New York.

Witty... [Bering] employs examples and analogies that make his
arguments seem like common sense rather than the hard-earned scientific
insights they really are.
— New Scientist

A balanced and considered approach to this often inflammatory topic.
— Nature

Jesse Bering is a brilliant young psychologist, a gifted storyteller, a careful reader of Jean-Paul Sartre, and a very funny man. And his first book, The Belief Instinct, is a triumph-a moving, provocative, and entertaining exploration of the human search for meaning.