Ophelia and the Marvelous Boy (Paperback) 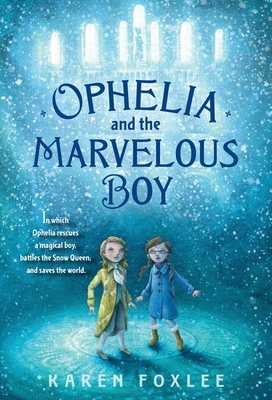 Once upon a time, there was a beautiful but evil Snow Queen. She yearned to dominate the world and only The Marvelous Boy, chosen and trained by the good wizards, stood in her way. She imprisoned the boy. Three hundred years later, Ophelia is exploring the museum where her father is mounting an exhibition. She's lonely and wandering on her own when she discovers a boy trapped in a room. He begs her to help him defeat the Snow Queen, and what follows is a truly marvelous story. For grades 3 and up.

“Magic is “messy and dangerous and filled with longing,” we learn in this brave tale of grief, villainy and redemption that borrows from the story of the Snow Queen. Set in a vast, chilly museum, the tale brings together a valiant girl, a charmed boy, a magical sword and a clock ticking down to the end of the world.”—The Wall Street Journal

This is the story of unlikely heroine Ophelia Jane Worthington-Whittard who doesn't believe in anything that can't be proven by science. She and her sister Alice are still grieving for their dead mother when their father takes a job in a strange museum in a city where it always snows. On her very first day in the museum Ophelia discovers a boy locked away in a long forgotten room.  He is a prisoner of Her Majesty, the Snow Queen.  And he has been waiting for Ophelia's help.

As Ophelia embarks on an incredible journey to rescue the boy everything that she believes will be tested. Along the way she learns more and more about the boy's own remarkable journey to reach her and save the world.

A story within a story, this a modern day fairytale about the power of friendship, courage and love, and never ever giving up.

KAREN FOXLEE is the author of two young adult novels, The Anatomy of Wings and The Midnight Dress. She lives in Gympie, Australia, with her daughter.

The Wall Street Journal, January 25, 2014:
“A present-day fairy tale that practically sparkles with its own icy menace...[a] memorable and ultimately moving novel for young readers.”

The Christian Science Monitor, January 31, 2014:
"Foxlee's novel will be read and loved by youngsters who've grown up on fairy tales, graduated to Harry Potter, and appreciate gorgeous writing and complex storytelling. In this story of friendship and yes, even bravery, Ophelia shines as one of the first true heroines of the 2014 crop of fabulous middle-grade novels."

Starred Review, School Library Journal, March 1, 2014:
“The writing sparkles . . . Foxlee’s fresh and imaginative take on this classic tale will be snapped up by fantasy and adventure lovers alike.”

The Horn Book, January/February 2014:
"Foxlee’s deftness with characterization and setting...makes this a satisfying fantasy."