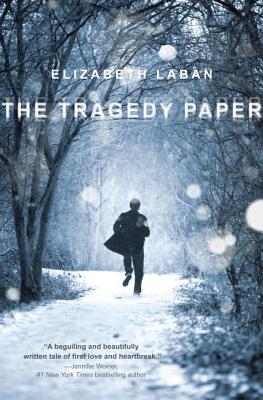 By Elizabeth Laban
Email or call for price.
Hard to Find

The Tragedy Report is a fast paced story from two points of views. Duncan is a senior returning to Irving, a prestigious boarding school. Irving has a number of traditions, the first students write a Tragedy Paper, Irving’s version of a senior year thesis. The second is that the graduating seniors leave a gift for the new students living in their old room. Duncan finds that he is living in Tim Macbeth’s old room. Tim is the albino kid who was only at Irving for part of his senior year. Tim leaves Duncan cds telling him all about his senior year. He promises to be completely honest with Duncan and that it could be the topic for his Tragedy Paper. Duncan starts to listen, but is afraid to relive the horrible accident that happened previous year. Tim's point of view is perfection. He's sweet, love struck and completely fearful of what could be. The Tragedy Paper is so unbelievably good.

“A coming-of-age story of the caliber of John Knowles' A Separate Peace, LaBan's debut novel will make you think about what it means to be yourself and to be a friend. When 17-year-old Duncan arrives at a prestigious boarding school, he discovers a trove of CDs left for him by the former occupant of his room, Tim Macbeth. As Duncan prepares for the dreaded Tragedy Paper, a senior thesis assigned by his English teacher, he listens to Tim's own tragic story of obsession with the wrong girl. Compelling!”
— Ellen Klein, Hooray for Books!, Alexandria, VA

It follows the story of Tim Macbeth, a seventeen-year-old albino and a recent transfer to the prestigious Irving School, where the motto is “Enter here to be and find a friend.” A friend is the last thing Tim expects or wants—he just hopes to get through his senior year unnoticed. Yet, despite his efforts to blend into the background, he finds himself falling for the quintessential “It” girl, Vanessa Sheller, girlfriend of Irving’s most popular boy. To Tim's surprise, Vanessa is into him, too, but she can kiss her social status goodbye if anyone ever finds out. Tim and Vanessa begin a clandestine romance, but looming over them is the Tragedy Paper, Irving’s version of a senior year thesis, assigned by the school’s least forgiving teacher.

Jumping between viewpoints of the love-struck Tim and Duncan, a current senior about to uncover the truth of Tim and Vanessa, The Tragedy Paper is a compelling tale of forbidden love and the lengths people will go to keep their secrets.

ELIZABETH LABAN worked at NBC News, taught at a community college, and has written for several magazines and newspapers. The Tragedy Paper is her first young adult novel. She lives in Philadelphia with her family.

Entertainment Weekly, January 4, 2013:
"LaBan's debut -- reminiscent of Jay Asher's Thirteen Reasons Why -- compassionately illustrates the tragedy of withholding love and friendship, or worse, never having the courage to seek them out."

Starred Review, Booklist, November 15, 2012:
“Debut novelist LaBan takes us into the private school culture as well as the heads of two charming yet very different teenage boys and their parallel love stories… Nonexistent parents, well-intentioned, likeable faculty on the periphery, elaborate dorm rooms with overstuffed closets, even the romantic, snow-covered campus all contribute to a setting that adds to the story’s heft and intrigue.”

The Philadelphia Inquirer, January 8, 2013:
"This novel is relatable and unusually gripping, even for an older reader - full of slings and arrows and outrageous fortune...Romantic love, hard work, loyalty, friendship, suffering: Like the great tragedies that inspired the novel, it's all here. LaBan's take on adolescent life is rendered in the sweet, intelligent tradition of John Irving, but without any of the prep-school genre's self-satisfaction."

HelloGiggles.com
"The Tragedy Paper is about how hard it can be not to belong, and how far we’ll go just to feel like we do. It’s an absolutely fantastic book."

School Library Journal, February 2013:
"Strong plotting and characterization make Tim and Vanessa come to life for readers as much as for Duncan, whose understanding of tragedy becomes almost overwhelmingly acute."

Booklist, February 2013:
"An engaging tale told by a boy rendered an outsider by his appearance, full of passion and almost unrequited love, signifying the heartbreaks and melodramas of high school."

The Bulletin of the Center for Children's Books, February 2013:
"An engaging tale told by a boy rendered an outsider by his appearance, full of passion and almost unrequited love, signifying the heartbreaks and melodramas of high school."