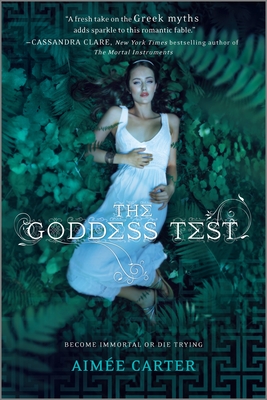 Every girl who has taken the test has died. Now it's Kate's turn. It's always been just Kate and her mom--and her mother is dying. Her last wish? To move back to her childhood home. So Kate's going to start at a new school with no friends, no other family and the fear her mother won't live past the fall. Then she meets Henry. Dark. Tortured. And mesmerizing. He claims to be Hades, god of the Underworld--and if she accepts his bargain, he'll keep her mother alive while Kate tries to pass seven tests. Kate is sure he's crazy--until she sees him bring a girl back from the dead. Now saving her mother seems crazily possible. If she succeeds, she'll become Henry's future bride, and a goddess. if she FAILS...

Aim\u00e9e Carter was born in 1986 and raised in Michigan, where she currently resides. She started writing fan fiction at eleven, began her first original story four years later, and hasn\u2019t stopped writing since. Besides writing and reading, she enjoys seeing movies, playing with her puppies, and wrestling with the puzzles in the paper each morning.