It Only Happens in the Movies (Hardcover) 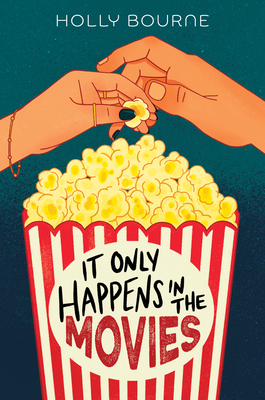 From award-winning author Holly Bourne comes a clever, deconstructed rom-com that proves that in real life “girl meets boy” doesn't always mean “happily ever after” . . . or does it? At turns funny, feminist, and achingly real, this read is perfect for fans of Sophie Kinsella, Patrick Ness, and Julie Buxbaum.

Audrey is over romance. While dealing with her parents’ contentious divorce, a breakup of her own, and shifting friendship dynamics, she has every reason to feel cynical.

But then she meets Harry, her fellow coworker at the local cinema. He’s brash, impulsive, and a major flirt. And even though Audrey tries to resist, she finds herself falling for his charms.

But in this funny, insightful, and ultimately empowering novel, love—and life—isn’t what it’s like in the movies.

Holly Bourne started her writing career as a news journalist, where she was nominated for Best Print Journalist of the Year. She then spent six years working as an editor, a relationship advisor, and general ‘agony aunt’ for a youth charity – helping young people with their relationships and mental health. Inspired by what she saw, she started writing teen fiction. Alongside her writing, she has a keen interest in women’s rights and is an advocate for reducing the stigma of mental health problems. She lives in London, England, but dreams of the day she has a garden, dog, chickens, and a bee hive.

★ "It's enough that this well-cast British import cleverly elevates and deconstructs genre tropes without ever belittling them, but it goes beyond even that, candidly addressing the weight of expectation behind a first sexual experience and the misconceptions that women especially often have about theirs. A substantial romance for even the most skeptical teens." —Booklist, STARRED review    "Audrey and Harry’s relationship sings with witty banter, electric heat, and feverish emotion, but Audrey’s journey to self-discovery reaps even more rewards, leaving readers with a fresh, realistic look at first love...A wild ride that’s high on drama and deep in self-reflection." —Kirkus   "Alongside snippets of Audrey’s rom-com essay, British author Bourne draws her protagonist as a believable mix of self-awareness and inexperience as she does her best to cope with her selfish father and hurting mother, her largely absent brother, and Harry’s omnipresent ex....a smart, funny, and emotionally satisfying rom-com." —Publishers Weekly   "YA readers will relate to the struggles Audrey faces and be pleased by the refreshing conclusion to this love story."—School Library Journal —