The Case for God (Hardcover) 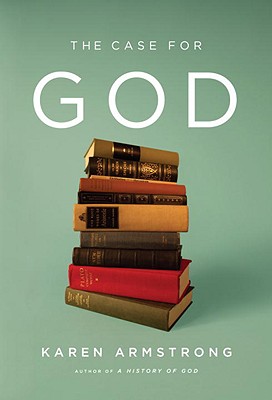 Moving from the Paleolithic age to the present, Karen Armstrong details the great lengths to which humankind has gone in order to experience a sacred reality that it called by many names, such as God, Brahman, Nirvana, Allah, or Dao. Focusing especially on Christianity but including Judaism, Islam, Buddhism, Hinduism, and Chinese spiritualities, Armstrong examines the diminished impulse toward religion in our own time, when a significant number of people either want nothing to do with God or question the efficacy of faith. Why has God become unbelievable? Why is it that atheists and theists alike now think and speak about God in a way that veers so profoundly from the thinking of our ancestors?

Answering these questions with the same depth of knowledge and profound insight that have marked all her acclaimed books, Armstrong makes clear how the changing face of the world has necessarily changed the importance of religion at both the societal and the individual level. And she makes a powerful, convincing argument for drawing on the insights of the past in order to build a faith that speaks to the needs of our dangerously polarized age. Yet she cautions us that religion was never supposed to provide answers that lie within the competence of human reason; that, she says, is the role of logos. The task of religion is “to help us live creatively, peacefully, and even joyously with realities for which there are no easy explanations.” She emphasizes, too, that religion will not work automatically. It is, she says, a practical discipline: its insights are derived not from abstract speculation but from “dedicated intellectual endeavor” and a “compassionate lifestyle that enables us to break out of the prism of selfhood.”

Karen Armstrong is the author of numerous other books on religious affairs--including "A History of God, The Battle for God, Holy War, Islam, Buddha, " and "The Great""Transformation--"and two memoirs, "Through the Narrow Gate" and "The Spiral Staircase." Her work has been translated into forty-five languages. She has addressed members of the U.S. Congress on three occasions; lectured to policy makers at the U.S. State Department; participated in the World Economic Forum in New York, Jordan, and Davos; addressed the Council on Foreign Relations in Washington and New York; is increasingly invited to speak in Muslim countries; and is now an ambassador for the UN Alliance of Civilizations. In February 2008 she was awarded the TED Prize and is currently working with TED on a major international project to launch and propagate a Charter for Compassion, created online by the general public and crafted by leading thinkers in Judaism, Christianity, Islam, Hinduism, and Buddhism, to be signed in the fall of 2009 by a thousand religious and secular leaders. She lives in London.

Praise for Karen Armstrong's The Case for God

"The time is ripe for a book like The Case for God, which wraps a rebuke to the more militant sort of atheism in an engaging survey of Western religious thought."
—Ross Douthat, The New York Times Book Review

"Armstrong's argument is prescient, for it reflects the most important shifts occurring in the religious landscape."
—Lisa Miller, Newsweek

"A thoughtful explanation, well-sourced and impressively rooted in the writings of theologians, philosophers, scholars and religious figures through the ages. . . . If Armstrong is out to bring respect to both reason and faith in the search of that transcendent meaning, she has done well."
—Repps Hudson, St. Louis Post-Dispatch

"The Case for God is Armstrong's most concise and practical-minded book yet: a historical survey of hwo rather than what we believe, where we lost the "knack" of religion and what we need to do to get it back."
—Michael Brunton, Ode

"In over a dozen books [Armstrong] has delivered something people badly want: a way to acknowledge that faith can be taken seriously as a response to deep human yearnings without needing to subscribe to the formality of organized belief."
—The Economist

"The Case for God should be read slowly, and savored."
—Karen R. Long, Cleveland Plain Dealer

"Armstrong's thesis is provocative, and her book illuminates a side of Christianity that has recently been overshadowed."
—Margaret Quamme, Columbus Dispatch

"Armstrong is ambitious. The Case for God is an entire semester at college packed into a single book—a voluminous, dizzying intellectual history. . . . Reading The Case for God, I felt smarter. . . . A stimulating, hopeful work.  After I finished it, I felt inspired, I stopped, and I looked up at the stars again.  And I wondered what could be."
—Susan Jane Gilman, NPR's "All Things Considered"

"Karen Armstrong's book is simply superb. Wide-ranging, detailed, well researched meticulously argued and beautifully written, it is a definitive analysis of the role of religious belief and transcendence in our history and our life."
—Dr Robert Buckman, author of Can We Be Good without God?

"Karen Armstrong, in writing The Case for God, provides the reader with one of the very best theological works of our time. It brings a new understanding to the complex relationship between human existence and the transcendent nature of God. This is a book that is so well researched and so deep with insight and soaring scholarship that only Karen Armstrong could have written it. The Case for God should be required reading for anyone who claims to be a believer, an agnostic or an atheist."
—The Right Reverend John Bryson Chane, D.D., Episcopal Bishop of the Diocese of Washington, D.C.

"No one is better qualified or more needed than Karen Armstrong to enter the hot public debate between believers and non-believers over the existence of God.  Her latest book, eagerly awaited and received, rings out with the qualities she brings to all of her work—The Case for God is lucid, learned, provocative, and illuminating.  Indeed, Armstrong once again does what she always does best by shining a clear light on the deepest mysteries of the religious imagination."
—Jonathan Kirsch, author of The Harlot by the Side of the Road

"Challenging, intelligent, and illuminating—especially for anyone reflecting on current discussions of atheism, often characterized as conflict between religion and science."
—Elaine Pagels, co-author of Reading Judas: The Gospel of Judas and the Shaping of Christianity

"With characteristic command of subject and crispness, the prolific and redoubtable independent British scholar and former nun takes yet another run at the world's religious history. . . . She's conceptual, humanistic and exceedingly well-read. . . . [An] articulate and accessible sweep through intellectual history. The "unknowing" of the mystics has its virtues and its place, but being well-read and knowledgeable makes one powerful and persuasive book.
—Publishers Weekly (starred review)

"Celebrated religion scholar Armstrong creates more than a history of religion; she effectively demonstrates how the West (broadly speaking) has grappled with the existence of deity and captured the concept in words, art and ideas. . . . A brilliant examination. . . . [An] accessible, intriguing study of how we see God."
—Kirkus Reviews (starred review)

"The new book by premier contemporary historian of religion is a history of God. . . . Presenting difficult ideas with utter lucidity, this registers at once as a classic of religious and world history."
—Ray Olson, Booklist (starred review)

"Karen Armstrong is one of [a] handful of wise and supremely intelligent commentators on religion. . . . As in so much of the rest of her hugely impressive body of work, Karen Armstrong invites us on a journey through religion that helps us to rescue what remains wise from so much that to so many . . . no longer seems true."
—Alain de Botton, The Observer

"Her conviction, passion and intelligence radiate throughout the book, making us feel the urgency of the ideas it seeks to convey."
—Charles Matthews, Baltimore Sun

"A tour de force. . . . She has dedicated herself to understanding the most prominent world faiths and explaining them to a secular/postsecular society."
—Jane Lampman, The Christian Science Monitor

"Perhaps her most ambitious work. . . . Without overlooking the differences between religions, Armstrong emphasizes their common call for compassion."
—Lisa Montanarelli, San Francisco Chronicle

"An utterly enthralling reading experience. . . . It ranks with A History of God as one of her finest achievements.
—Booklist

"In her typical magisterial fashion, she chronicles these tales in dazzling prose with remarkable depth and judicious breadth."
—Publishers Weekly

"Armstrong's erudition is truly impressive. . . . Few people are better qualified to explain that what so often divides us ought to unite us instead."
—Cleveland Plain Dealer

"Her conviction, passion and intelligence radiate throughout the book, making us feel the urgency of the ideas it seeks to convey."
—New York Sun

"This could very possibly be one of the greatest intellectual histories ever written."
—Library Journal (starred review)

"On prominent display in this book are Armstrong's usual virtues—wide knowledge, meticulous research, a superb appreciation for the beauty and power of religious and philosophical ideasls, and general readability."
—Shambhala Sun

"This magisterial work, continuing Karen Armstrong's mission to explore the place and purposes of religions in the modern world, follows in the stream of her books on Christianity, Judaism, Islam, and Buddaism."
—Spirituality & Health

"A story about becoming human, being recognized, finally recognizing oneself. . . . It fills the reader with hope." –The Washington Post Book World

"Riveting. . . . It's a pleasure to read simply because it's honest and hopeful. . . . Armstrong is such an evocative writer." –Newsday

"I loved this powerful and moving account, and read it nonstop." –Elaine Pagels, author of Beyond Belief

"In . . . Armstrong's memoir there lurks wisdom about the making and remaking of a life . . . from which all of us could learn." –The New York Times Book Review

"A powerful memoir. . . . Buoyed by keen intelligence and unflinching self-awareness and honesty. . . . Armstrong is an engaging, energetic writer." –The Christian Science Monitor

"The story of the making of a writer. . . . It manages to dramatize the writer's process of intellectual development and to find in it genuine interest, and, indeed, suspense. . . . As an account of the intellectual journey of an intelligent and unique individual, the book is often gripping." –San Francisco Chronicle

"Candid and compelling, and the sentences are flawless." –The Dallas Morning News

"Remarkable. . . . Unflinching. . . . This candid memoir will clarify thinking about the search for the sacred." –Booklist

"Armstrong writes with sensitivity and wisdom. . . . She employs a breadth of learning that reflects the scintillating, shifting light and shade of human experience." –The Times (London)

"An honest and affecting book." –The Independent

"Open and accessible, Armstrong manages to put into words something that most of us cannot express." –New Statesman


Critical Acclaim for Karen Armstrong's A History of God

"[An] impressive work . . . [R]eadable and provocative, this is a major contribution to religious studies." –Ilene Cooper, Booklist

"An admirable and impressive work of synthesis that will give insight and satisfaction to thousands of lay readers." --The Washington Post Book World