The Favored Daughter: One Woman's Fight to Lead Afghanistan into the Future (Paperback) 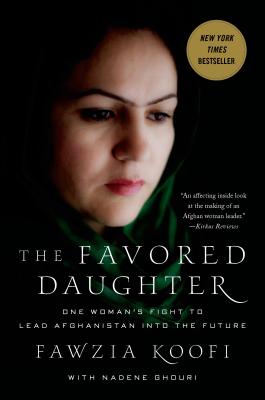 As America prepares to draw down its forces in Afghanistan, this story of survival and hope from a voice of the country's most oppressed group could not be more timely. Born to the second of her father's seven wives in rural Afghanistan, Fawzia Koofi's mother—who had hoped for a son—left her to die in the sun after birth. But despite a childhood of abuse and deprivation in a notoriously sexist society, she rose above her fate to become the first female Speaker of Parliament. Along the way, she faced the murders of her father, brother, and husband, and numerous attempts on her life. Here, she shares her amazing story, punctuated by a series of poignant letters she wrote to her two daughters before each political trip—letters describing the future and freedoms she dreamed of for them and all their countrywomen. This eloquent memoir pleads for the world to recognize the politically devastating consequences if a frustrated American military relinquishes the country to the Taliban, undoing all the fragile progress of recent years.

Fawzia Koofi is Afghanistan's first female Parliament speaker and a noted activist for women's and children’s rights. She is the co-author of The Favored Daughter. She is currently a leading candidate for the presidential elections in 2014 and has been quoted by the BBC, Time, The Washington Post, The Los Angeles Times, CNN, The Globe and Mail, and many others. Koofi was selected as a Young Global Leader by the World Economic Forum in 2009. Before getting elected to Parliament, Koofi was employed by UNICEF as a child protection officer from 2002 through 2004. The mother of two girls, she lives in Kabul.

Nadene Ghouri is an award-winning journalist and broadcaster. She is the co-author of The Favored Daughter. She is a former correspondent of both the BBC and Al Jazeera English.

“Koofi's story is one of determination and hope and shows the power of one person making the strong right choices every day to bring change ... I ask you to read Koofi's book. See for yourself.” —The Huffington Post

“Koofi's personal story is engaging and immersive…[she] deftly writes about changes in cultural customs and norms and how they affected women, with nuance that is sometimes absent from commentary surrounding Afghan women's lives…an inspiring and courageous story.” —Muslimah Media Watch

“The Favored Daughter yiels important background about a part of the world that we should not forget or dismiss.” —The Minneapolis Star Tribune

“One of the country's most outspoken democracy activists . . .Koofi describes unflinchingly the wreckage she witnessed at the hands of Afghans of all ideologies and clans.” —The Globe and Mail

“An affecting inside look at the making of an Afghan woman leader, in spite of the repression by traditional Islamic society and the Taliban . . . With moving letters to her daughters opening each chapter, Koofi delivers an important message.” —KIRKUS Reviews

“A gripping account of survival against the odds. A sometimes brutal and shocking read, The Favored Daughter is never anything less than inspiring. Read it - and be happy for the chances life has given you.” —Andrea Busfield, author of Born under a Million Shadows