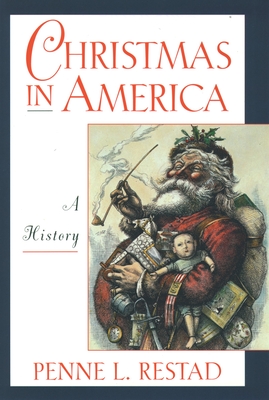 The manger or Macy's? Americans might well wonder which is the real shrine of Christmas, as they take part each year in a mix of churchgoing, shopping, and family togetherness. But the history of Christmas cannot be summed up so easily as the commercialization of a sacred day. As Penne Restad reveals in this marvelous new book, it has always been an ambiguous meld of sacred thoughts and worldly actions-- as well as a fascinating reflection of our changing society.
In Christmas in America, Restad brilliantly captures the rise and transformation of our most universal national holiday. In colonial times, it was celebrated either as an utterly solemn or a wildly social event--if it was celebrated at all. Virginians hunted, danced, and feasted. City dwellers flooded the streets in raucous demonstrations. Puritan New Englanders denounced the whole affair. Restad shows that as times changed, Christmas changed--and grew in popularity. In the early 1800s, New York served as an epicenter of the newly emerging holiday, drawing on its roots as a Dutch colony (St. Nicholas was particularly popular in the Netherlands, even after the Reformation), and aided by such men as Washington Irving. In 1822, another New Yorker named Clement Clarke Moore penned a poem now known as 'Twas the Night Before Christmas, virtually inventing the modern Santa Claus. Well-to-do townspeople displayed a German novelty, the decorated fir tree, in their parlors; an enterprising printer discovered the money to be made from Christmas cards; and a hodgepodge of year-end celebrations began to coalesce around December 25 and the figure of Santa. The homecoming significance of the holiday increased with the Civil War, and by the end of the nineteenth century a full- fledged national holiday had materialized, forged out of borrowed and invented custom alike, and driven by a passion for gift-giving. In the twentieth century, Christmas seeped into every niche of our conscious and unconscious lives to become a festival of epic proportions. Indeed, Restad carries the story through to our own time, unwrapping the messages hidden inside countless movies, books, and television shows, revealing the inescapable presence--and ambiguous meaning--of Christmas in contemporary culture.
Filled with colorful detail and shining insight, Christmas in America reveals not only much about the emergence of the holiday, but also what our celebrations tell us about ourselves. From drunken revelry along colonial curbstones to family rituals around the tree, from Thomas Nast drawing the semiofficial portrait of St. Nick to the making of the film Home Alone, Restad's sparkling account offers much to amuse and ponder.

Penne L. Restad is a lecturer in American History at the University of Texas at Austin.