Eclipses: What Everyone Needs to Know (Hardcover) 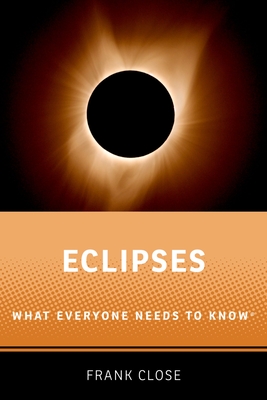 "Have you ever seen a total solar eclipse?" If the question caused you to search your memory, the correct answer would have been "no." A common response is: "Yes--I saw one, it was about 90% partial eclipse where I lived." A 90% partial eclipse is indeed a remarkable phenomenon, but true totality leaves all else in the shade, in all senses of the phrase. Ask the question of anyone who has experienced the full sensation of being obliterated by the moon's shadow, and they will reply "yes"--without hesitation--and continue with a monologue describing the overwhelming experiences and unique phenomena that ensued.
On 21 August 2017 millions of people across the United States witnessed "The Great American Eclipse" of the Sun. The moment it was over, people around the world were asking questions: what caused the weird shadows and colors in the build up to totality? Were those ephemeral bands of shadows gliding across the ground in the seconds before totality real or an optical illusion? Why this, what that, but above all: where and when can I see a total solar eclipse again?
Eclipses: What Everyone Needs to Know helps explain the profound differences between a 99.99% partial eclipse and true totality, and inform readers how to experience this most beautiful natural phenomenon successfully. It covers eclipses of sun, moon, and other astronomical objects, and their applications in science, as well as their role in history, literature, and myth. It describes the phenomena to expect at a solar eclipse and the best ways to record them--by camera, video, or by simple handmade experiments. The book covers the timetable of upcoming eclipses, where the best locations will be to see them, and the opportunities for using them as vehicles for inspiration and education.
As a veteran of seven total solar eclipses, physicist Frank Close is an expert both on the theory and practice of eclipses. Eclipses: What Everyone Needs to Know is a popular source of information on the physics of eclipses.

Frank Close is an eminent research theoretical physicist in nuclear and particle physics. He is Emeritus Professor of Physics at Oxford University and a Fellow of Exeter College, and was formerly the Head of the Theoretical Physics Division at the Rutherford Appleton Laboratory. He served as Chair of the UK Space Exploration Working Group 2007 which culminated with Tim Peake's launch to the ISS. He is the author of several books, including the best-selling Lucifer's Legacy (OUP, 2000), and was the winner of the Kelvin Medal of the Institute of Physics for his "outstanding contributions to the public understanding of physics." His other books include The Cosmic Onion (1983), The Particle Explosion (1987), End (1988), Too Hot to Handle (1991), and The Particle Odyssey (OUP, 2002). In 2013 Professor Close was awarded the Royal Society Michael Faraday Prize for communicating science.