Frances and the Monster (Hardcover) 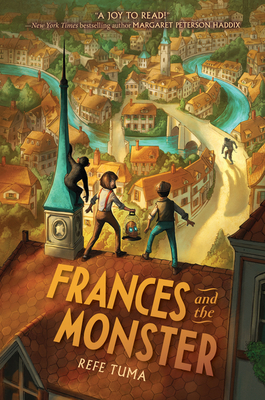 What would you do if you accidentally brought a monster to life and set him loose on your town?

Adventurous and charming, this middle grade twist on Frankenstein features a precocious main character who does just that. Perfect for fans of Serafina and the Black Cloak and the Greenglass House series.

Frances Stenzel was just trying to prove her scientific worth to her parents so they would take her with them to their scientific symposiums for once—instead, she reawakened her great-grandfather’s secret and most terrible invention.

Before it can destroy the town, she sets off after it, with her pet chimp and sarcastic robot tutor by her side. But monster-hunting isn’t easy, and she’ll have to face a persistent constable, angry locals, and an unexpected friendship ahead—all while the trail for the monster goes cold and time is running out before her science career, and the city itself, are doomed forever.

Full of thrills and heart alike, Frances and the Monster takes readers through winding streets and over perilous rooftops, with wily monsters, unpredictable twists, and powerful friendships waiting along the way.

Refe Tuma is the co-creator of Dinovember and the What the Dinosaurs Did picture book series, including What the Dinosaurs Did Last Night, named a Best Children’s Book of the Year with Honors by Bank Street College. His Pushcart Prize and Best of the Net nominated short stories and essays have appeared in all sorts of places, from wonderfully obscure literary journals to the New York Times. He lives with his family and his dog Boris in Kansas City, where he once experienced all four seasons in a single day. Learn more at refetuma.com. Oh, and it’s pronounced ‘reef.’

"A captivating tale filled with monsters, marvels, and misadventures, Frances and the Monster is gripping, inventive, and deeply moving. Tuma’s middle-grade debut is a harrowing and heartfelt tribute to owning your scars and learning to turn them into stars." — Alysa Wishingrad, author of The Verdigris Pawn

"This book has twists, turns, and surprises galore…And the ending, holy moly! No spoilers here, but this is the kind of book you'll want to talk about with a friend." — Ben Gartner, author of The Eye of Ra series

“Bursting with wry humor and references to Frankenstein, Tuma’s (the What the Dinosaurs Did series) idiosyncratic, utterly original tale moves at breakneck speed …while injecting considered discussions of modern themes such as gender roles and privilege.” — Publishers Weekly (starred review)

“[Frances’] memorable adventure, with strong echoes of Mary Shelley’s Frankenstein, plays out against a colorful background as she confronts who she is in a truly shocking finale. A fast-paced and remarkably original tale.”  — Kirkus Reviews