If You, Then Me (Paperback) 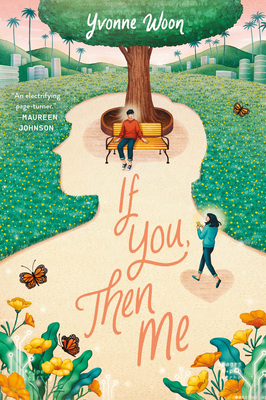 Warm and funny, this coming-of-age romcom from teen author Yvonne Woon is set in Silicon Valley and delves into the questions we all ask when making mistakes—in life and in love—perfect for fans of Emergency Contact and When Dimple Met Rishi. Now available in paperback.

“This page-turner offers a peek into the dark side of Silicon Valley and sheds light on issues hidden beneath the glitz of startup culture, including old-boy networks, unsustainable lifestyles, and the lure of promises that are too good to be true. A riveting cautionary tale." -Kirkus Reviews

Xia is stuck in a lonely, boring loop. Her only escapes are Wiser, an artificial intelligence app she designed to answer questions as her future self, and a mysterious online crush she knows only as ObjectPermanence.

Until one day Xia enrolls at the Foundry, an app incubator for tech prodigies in Silicon Valley, and suddenly anything is possible. Flirting with Mast, a classmate also working on AI, leads to a date. Speaking up generates a vindictive nemesis intent on publicly humiliating her. And running into Mitzy Erst, Foundry alumna and Xia’s idol, could give Xia all the answers.

And then Xia receives a shocking message from ObjectPermanence. He is at the Foundry, too. Xia is torn between Mast and ObjectPermanence—just as Mitzy pushes her towards a shiny new future. Xia doesn’t have to ask Wiser to know: The right choice could transform her into the future self of her dreams, but the wrong one could destroy her.

Yvonne Woon holds an MFA from Columbia University and is the author of the Dead Beautiful series. Originally from Massachusetts, she spent three years in Silicon Valley, where she worked as a dog walker for tech elite. Other than writing, it was the best job she’s ever had. She currently resides in Atlanta, Georgia.

"This page-turner offers a peek into the dark side of Silicon Valley and sheds light on issues hidden beneath the glitz of startup culture, including old-boy networks, unsustainable lifestyles, and the lure of promises that are too good to be true. A riveting cautionary tale."
— Kirkus Reviews

"Really, this story has it all—secrets, schemes, plot twists, a mystery aspect as we try to clue together who Xia’s anonymous online friend is, as well as a sweet romance that made my heart soar . . . An original and fast-paced story of loneliness and found family, exploitation of young minds and the power of such individuals, perfect for any reader who wants to see more women in tech!" — The Nerd Daily

"If You, Then Me by Yvonne Woon: Xia is a technical prodigy bored of her everyday life. That is, until she finds an app incubator in Silicon Valley and quickly realizes the world has so much to offer. Dive into this coming-of-age rom-com from teen author Yvonne Woon." — Parade

“A romantic mystery bound up with a thrilling peek behind the curtain at the dark workings of the social media and tech world. An electrifying page-turner." — Maureen Johnson, bestselling author of 13 Little Blue Envelopes and the Truly Devious series

"IF YOU, THEN ME unfolds with an unexpected urgency, immersing readers in the fast-paced, glittering tech scene of Southern California. Yvonne Woon perfectly captures this morally murky world built for the privileged and the male, and shows readers how difficult it can be for a young woman to find her place. The mystery of her secret penpal will keep readers guessing from the start, and the romance is full of quips, tacos, and kisses on sandy beaches. I couldn't put it down!" — Rachel Carter, author of the So Close to You series

"Yvonne Woon's If You, Then Me is unquestionably one of the very best YA books I've ever read. This book gives readers a peek into the fascinating, often impenetrable social landscape of Silicon Valley, and delivers a delicious villain, hilarious dialogue, and a realistic look into why women tear each other down in a white, male-dominated industry. I wanted this book to go on forever, so I could follow Xia and Wiser on their next adventure." — Lindsay Sproul, author of We Were Promised Spotlights