The Aunt Who Wouldn't Die: A Novel (Hardcover) 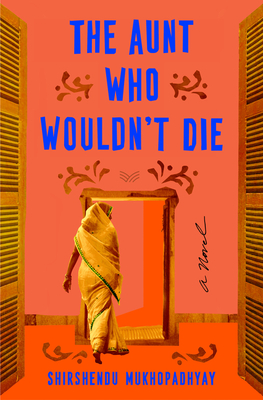 A frenetic, funny, and fresh novel about three generations of Mitra women. Somlata has married in the the dynastic but declining Mitra family. While wondering the halls of the grand decaying Mitra mansion, Somlata stumbles upon the body of her great aunt in law, Pishima. Pishima is a child bride widowed at twelve. She finally passes away at the ripe old age of 70. Pishima has a few scores to settle with the Mitra family and now her ghost intends to meddle in their lives. Boshon is the child of Somlata and is a rebel against her family. Perhaps Pishima's yearning spirit lives on in Boshon's heart?

A laugh-out-loud, tug-at-your-heartstrings tale of love, family, and freedom centered around three generations of Bengali women.

Somlata has just married into the dynastic but declining Mitra family. At eighteen, she expects to settle into her role as a devout wife in this traditional, multi-generational family. But then Somlata, wandering the halls of the grand, decaying Mitra mansion, stumbles upon the body of her great aunt-in-law, Pishima.

A child bride widowed at twelve, Pishima has finally passed away at the ripe old age of seventy. But she isn’t letting go just yet. Pishima has long harbored a grudge against the Mitras for keeping her in perpetual widowhood, never allowed to fall in love.. Now, her ghost intends to meddle in their lives, making as much mischief as possible. Pishima gives Somlata the keys to her mysterious box of gold to keep it out of the Mitras’ hands. However, the selfless Somlata, witnessing her new family waste away their wealth to the brink of bankruptcy, has her own ideas.

Boshon is a book-loving, scooter-riding, rebellious teenager who wants nothing to do with the many suitors that ask for her hand. She yearns for freedom and wants to go to college. But when her poor neighbor returns from America she finds herself falling in love. Perhaps Pishima’s yearning spirit lives on in her own her heart?

The Aunt Who Wouldn’t Die is a frenetic, funny, and fresh novel about three generations of Mitra women who are surprising at every turn and defy all expectations. They may be guarding a box of gold, but they are the true treasures in this gem of a novel.

Shirshendu Mukhopadhyay was born in 1935 in present-day Bangladesh. He earned a master’s degree from Calcutta University and worked for some time as a schoolteacher before becoming a journalist and author. The Aunt Who Wouldn’t Die is a much-loved contemporary classic in Bengali, and it was adapted into the film Goynar Baksho in 2013. The first English translation was published in India in 2017.