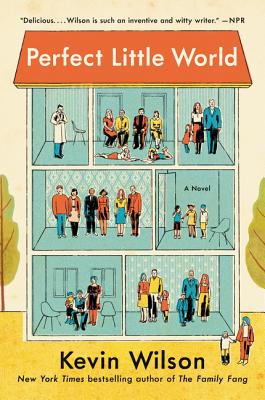 Kevin Wilson is the New York Times bestselling author of the novels Nothing to See Here, which was a Read with Jenna book club selection; The Family Fang, which was adapted into an acclaimed film starring Nicole Kidman and Jason Bateman; and Perfect Little World; as well as the story collections Tunneling to the Center of the Earth, winner of the Shirley Jackson Award; and Baby, You’re Gonna Be Mine. His fiction has appeared in Ploughshares, Southern Review, One Story, A Public Space, and Best American Short Stories. He lives in Sewanee, Tennessee, with his wife and two sons.

“Quirky. . . . Wilson’s Perfect Little World finds its bliss in the vast disconnect between people’s best intentions and where they land.” — Entertainment Weekly

“The sheer energy of imagination in Wilson’s work makes other writers of realistic fiction look lazy. . . . The novel’s grand finale . . . reminds us that not everything unpredictable is painful or bad, and that conventional arrangements have no monopoly on the profound connections that make family.” — Newsday

“Family is far more than a biological bond; that’s not a groundbreaking idea. But Wilson has found a lovely new way of telling readers something they know by heart.” — Houston Chronicle

“The compensation is a greater richness in the characters, and a refreshingly un-ironic attitude toward love — Knoxville News-Sentinel

“In light and lively prose that practically tap dances on the page, Wilson shrewdly probes the intricate tensions and machinations that lie at the core of this eccentric family unit. . . . A provocative and uplifting read.” — Bookpage

“Stellar. . . . Compelling. . . . Realer and wiser and sadder and eventually reassuring about human nature than dozens of other novels.” — Booklist, Starred Review

“Bittersweet. . . . Wilson delves into the drama and tensions inherent in this strange aquarium. . . . A moving and sincere reflection on what it truly means to be a family — Kirkus, Starred Review

“Sweet and thoroughly satisfying. . . . Wilson grounds his premise in credible human motivations and behavior, resulting in a memorable cast of characters.” — Publishers Weekly

“[A] moving novel about love, parenting, and the families we create for ourselves.” — Library Journal