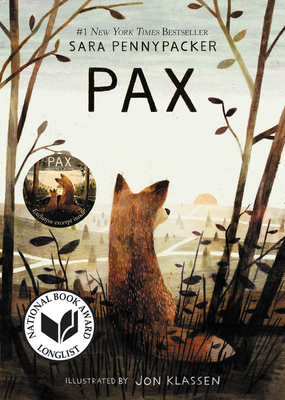 Peter and Pax, his pet fox, have been inseparable since Peter found Pax on the day of his mother's funeral. Now Peter's father is headed off to war and Peter is headed to live with his strict grandfather, who won't allow Pax to stay. Peter must abandon Pax, an act that devastates both of them, but they both struggle to reunite and survive. Set in an undefinied country in an undefined time, PAX forces the reader to consider the costs of conflict -- to humans, to animals, to the land. Told in the voices of both Peter and Pax, this novel is beautifully written and beautifully illustrated by Caldecott winner Jon Klassen, Do not let this story pass you by! Best for grades 5 and up.

From bestselling and award-winning author Sara Pennypacker comes a beautifully wrought, utterly compelling novel about the powerful relationship between a boy and his fox. Pax is destined to become a classic, beloved for generations to come.

Pax and Peter have been inseparable ever since Peter rescued him as a kit. But one day, the unimaginable happens: Peter's dad enlists in the military and makes him return the fox to the wild.

At his grandfather's house, three hundred miles away from home, Peter knows he isn't where he should be—with Pax. He strikes out on his own despite the encroaching war, spurred by love, loyalty, and grief, to be reunited with his fox.

Meanwhile Pax, steadfastly waiting for his boy, embarks on adventures and discoveries of his own. . . .

Pax is a wonderful choice for independent reading, sharing in the classroom, homeschooling, and book groups.

Plus, don't miss Pax, Journey Home, the sequel to the award-winning and modern classic Pax.

Sara Pennypacker is the author of the #1 New York Times bestselling Pax; the award-winning Clementine series and its spinoff series, Waylon; and the acclaimed novels Summer of the Gypsy Moths and Here in the Real World. She divides her time between Cape Cod, Massachusetts, and Florida. You can visit her online at www.sarapennypacker.com.

Jon Klassen grew up in Niagara Falls, Canada, and now lives in Los Angeles, California. He is the New York Times bestselling author and illustrator of several books, including I Want My Hat Back and This Is Not My Hat, for which he won the Caldecott Medal. Two of his picture books have been named Caldecott Honor books: Sam and Dave Dig a Hole and Extra Yarn (winner of the Boston Globe–Horn Book Award), both by Mac Barnett. You can visit him online at www.burstofbeaden.com.

“Pax the book is like Pax the fox: half wild and wholly beautiful.” — New York Times Book Review

“In an exceptionally powerful, if grim story, Pennypacker does a remarkable job of conveying the gritty perspective of a sheltered animal that must instantly learn to live in the wild.” — Publishers Weekly (starred review)

“A startling work of fiction that should be read-and discussed-by children and adults alike.” — School Library Journal (starred review)

“An emotional, thought-provoking story of conflict, loyalty, and love.” — The Horn Book

“Sometimes an author steps aside from a popular series to break new ground, as evidenced in this arresting novel, at once a wilderness adventure about survival and a philosophical foray into big questions.” — San Francisco Chronicle

“Pennypacker’s elegant language and insight into human nature spin a fable extolling empathy above all. By the novel’s poignant ending, Pennypacker has gently made the case that all of us should aspire to that view—children and adults alike.” — Time magazine

“Searingly honest and heartbreakingly lovely, Pax is, quite simply, a masterpiece.” — Katherine Applegate, Newbery Award-winning author of The One and Only Ivan

“A sweeping and enchanting wartime story of trust, loyalty, betrayal, and the love of a boy for the fox he’s raised since he was a kit. A master storyteller, Pennypacker leads the reader along a path of shifting hopes to the story’s heart-wrenching conclusion.” — Ann M. Martin, Newbery Honoree, author of Rain Reign

“Pax is set in an unspecified time and place so that the details of the war are unimportant. What is prime is the graceful but haunting story of boy and fox—their relationship set against man-made chaos.” — Columbus Dispatch

“Both boy and fox experience the kindness of others even with the backdrop of imminent war.” Recommended 2016 Holiday Gift for Tween Readers — Brightly