The Bees: A Novel (Paperback) 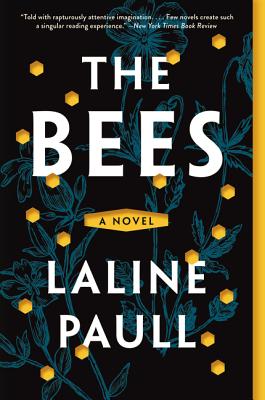 Flora 717 is unusual for a member of the sanitation crew, the lowest caste of bees in the hive. She is large, intelligent, and curious, and she can speak. Taken in by a member of the priestess caste, she is granted unprecedented access to many areas of the hive, even to the queen Mother herself. All is not well around the orchard, however. The flowers are fewer, and the foragers are returning with little, if they return at all. The drones are eating them out of hive and home. The Mother is ill. When the priestess discovers that Flora 717 has learned and understood more than the priestess would like, she wipes Flora's mind….ineffectively, as it turns out. Flora 717 attempts to keep her secret, stay out of the way of the priestesses, and help her hive survive. She lives only to Accept, Obey, and Serve, but when her own body betrays her, what will be the cost?

“This book is completely amazing. Paull uses real bee behavior as the basis for a tale of complex hive society, complete with a religion, a caste system, and threats from the outside world. The heroine, Flora 717, is an abnormally large and intelligent bee. Her size and strength give her opportunities to work at a variety of jobs, and as she begins to uncover the dark secrets of the hive, Flora makes a decision that could change the future of her entire hive. Well-crafted and filled with intrigue and action, this is a brilliant, thought-provoking, and completely original debut that does for bees what Richard Adams did for rabbits in Watership Down.”
— Flannery Fitch, Bookshop Santa Cruz, Santa Cruz, CA

The Handmaid’s Tale meets The Hunger Games in this brilliantly imagined debut set in an ancient culture where only the queen may breed and deformity means death.

Flora 717 is a sanitation worker, a member of the lowest caste in her orchard hive where work and sacrifice are the highest virtues and worship of the beloved Queen the only religion. But Flora is not like other bees. With circumstances threatening the hive’s survival, her curiosity is regarded as a dangerous flaw but her courage and strength are an asset. She is allowed to feed the newborns in the royal nursery and then to become a forager, flying alone and free to collect pollen. She also finds her way into the Queen’s inner sanctum, where she discovers mysteries about the hive that are both profound and ominous.

But when Flora breaks the most sacred law of all—daring to challenge the Queen’s fertility—enemies abound, from the fearsome fertility police who enforce the strict social hierarchy to the high priestesses jealously wedded to power. Her deepest instincts to serve and sacrifice are now overshadowed by an even deeper desire, a fierce maternal love that will bring her into conflict with her conscience, her heart, her society—and lead her to unthinkable deeds.

Thrilling, suspenseful and spectacularly imaginative, The Bees gives us a dazzling young heroine and will change forever the way you look at the world outside your window.

Laline Paull studied English at Oxford, screenwriting in Los Angeles, and theater in London. She lives in England with her husband, photographer Adrian Peacock, and their three children.

“Fascinating… engrossing… Paull’s clear fascination with her source material brings humanity and warmth to a depiction of the remarkable social world of bees, which is no small achievement.” — —Huffington Post

“This is a rich, strange book...convincing in its portrayal of the mind-set of a bee and a hive. I finished it feeling I knew...how bees think and live. This is what sets us humans apart—our imagination can...create a complete, believable world so different from our own.” — —Tracy Chevalier, New York Times bestselling author of Girl With a Pearl Earring

“It quickly became clear that in its basic facts, the novel sticks closely to real-world apian biology and behavior. That is fascinating enough, but Paull deftly wields this information to create an even more elaborately layered culture of beeness…Beautiful.” — Washington Post

“Brilliantly imagined…Paull’s use of human language to describe this tiny, intricate world is classic storytelling at its finest…The Bees boasts a refreshingly feminist spin on fairy tale-style plots….A wildly creative book that resonates deeply for quite a long time. — Austin Chronicle

“It’s rare to come across a book as mind-blowingly imaginative as Laline Paull’s The Bees. It’s even more rare for such works to be successful, well-written, gripping stories...The Bees is an utterly memorable wonder of a novel.” — Kirkus Reviews

“A marvelous work of fiction… The parallels to “1984” and Margaret Atwood’s “The Handmaid’s Tale” are numerous but this story is also its own.” — Florida Times-Union