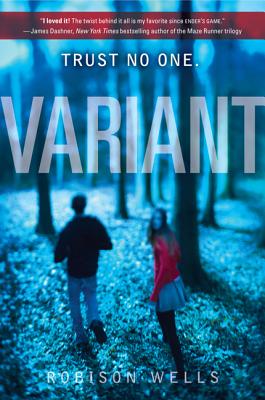 This is book number 1 in the Variant series.

Benson Fisher thought that a scholarship to Maxfield Academy would be the ticket out of his dead-end life.

Now he's trapped in a school that's surrounded by a razor-wire fence, where video cameras monitor his every move—and where breaking the rules equals death.

All Benson wants is to find a way out. But when he stumbles upon the real secret the school has been hiding, he realizes that escape may be impossible.

Robison Wells is also the author of Blackout, Variant, and Feedback. Variant was a Publishers Weekly Best Book and a YALSA Quick Pick for Reluctant Readers. Robison lives in the Rocky Mountains in a house not too far from elk pastures. His wife, Erin, is a better person than he will ever be, and their three kids cause mischief and/or joy.

“An intense journey with some of the most shocking twists and turns I’ve ever read.”
— Pittacus Lore, #1 New York Times bestselling author of I Am Number Four

“A chilling, masterful debut. With its clever premise, quick pace, and easy-to-champion characters, Wells’ story is a fast, gripping read with a cliffhanger that will leave readers wanting more.”
— Publishers Weekly (starred review)

“Variant is a compelling story on so many levels. I loved it! The twist behind it all is my favorite since Ender’s Game.”
— James Dashner, New York Times bestselling author of The Maze Runner

“An exciting, edge-of-your-seat read that combines psychological themes from works like Lord of the Flies, The Hunger Games and Ender’s Game in a truly unique way. Variant should join the ranks of today’s must-read science fiction and fantasy series. A highly recommended addition to any collection for teens.”
— Voice of Youth Advocates (VOYA) (starred review)

“Benson’s account unfolds in a speedy, unadorned first person. Hard to put down from the very first page, this fast-paced novel answers only some of the questions it poses, holding some of the most tantalizing open for the next installment in a series that is anything but ordinary.”
— Kirkus Reviews

“Fans seeking a fast-paced, action-heavy read will find this generates a lot of excitement.”
— Bulletin of the Center for Children’s Books