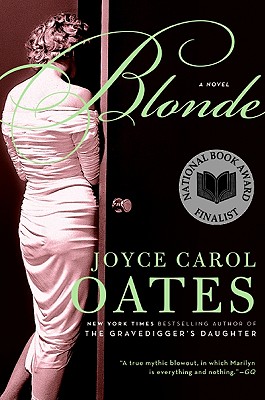 By Joyce Carol Oates
$17.99
Email or call for price

One of America’s most acclaimed novelists boldly re-imagines one of America’s most enduring icons in Blonde—the National Book Award-nominated bestseller by Joyce Carol Oates. The legend of Marilyn Monroe—aka Norma Jeane Baker—comes provocatively alive in this powerful tale of Hollywood myth and heartbreaking reality. Marilyn Monroe lives—reborn to tell her untold history; her story of a star created to shine brightest in the Hollywood firmament before her fall to earth. Blonde is a dazzling fictional portrait of the intricate inner life of the idolized and desired movie star as only the inimitable Joyce Carol Oates could paint it.

Joyce Carol Oates is a recipient of the National Medal of Humanities, the National Book Critics Circle Ivan Sandrof Lifetime Achievement Award, the National Book Award, and the 2019 Jerusalem Prize, and has been several times nominated for the Pulitzer Prize. She has written some of the most enduring fiction of our time, including the national bestsellers We Were the Mulvaneys; Blonde, which was nominated for the National Book Award; and the New York Times bestseller The Falls, which won the 2005 Prix Femina. She is the Roger S. Berlind Distinguished Professor of the Humanities at Princeton University and has been a member of the American Academy of Arts and Letters since 1978.