YA pre-order alert! Folks, there’s a new can’t-miss book on its way to our shelves. It’s called Legendborn, and it’s the debut YA novel from author Tracy Deonn. Legendborn is a bewitching blend of fantasy and contemporary YA, full of Arthurian legend and Black Girl Magic. If you like books about myth and magic—if you’re into Kiersten White or Tomi Adeyemi or Victoria Schwab or Dhonielle Clayton—you’re going to love Legendborn. Blue Willow staffer Caroline Roberts is certainly a fan, and we can vouch for her excellent taste! Enjoy this Q&A between Caroline and Tracy, then be sure to pre-order your copy of Legendborn, which comes out on September 15. Be warned: There are a few ~*spoilers*~ within... so if you need to bookmark this one and come back once you’ve read the book, be sure to do that!

Caroline Roberts: There is so much to unpack in this book—the magical systems, the Legendborn, the Welsh language, the casual racism of the South, Bree’s ancestor walks (to name just a few)—and yet there isn’t a single thing that doesn’t seem vital to the storyline. How did you wrestle all this into shape? We feel like you must have piles of research notes!

Tracy Deonn: Yes! I feel so seen by this question! There's so much happening in the book and keeping up with all the threads was definitely challenging. I used more than a dozen spreadsheets over the course of drafting and revisions, and they kept growing or getting re-organized. Some sheets were just about keeping track of recurring details. For example, I have a sheet that is just about the Scions and their bloodlines, their rankings, their inheritances (powers and personality traits), preferred weapons and character traits. I collaborated in Google Sheets with my Welsh language and medievalist consultant for all of the Welsh terms, both made up and real. The magic systems in the book are very, very old and fairly strict; they needed to be functional and solid over dozens of generations in order to work as I needed them to in the book. So, my first step was to write them out in prose form first, in mostly full sentences, to test whether I could actually verbalize them! Then each system was moved to whiteboards to play out examples or work out problems. I have three whiteboards in my house: one in my kitchen for brainstorming while cooking or doing other tasks, one in my office that I can write on and refer back to as I work at my desk, and another that is portable so I can use it while sitting on the ground. I think the magic systems for the Legendborn, the rootcrafters, and the Bloodcrafters took about a year to design and "test" in revisions. The image here is an early plot map for Legendborn, with some heavy spoilers erased! You can see the color coding I used to balance the different plot threads. 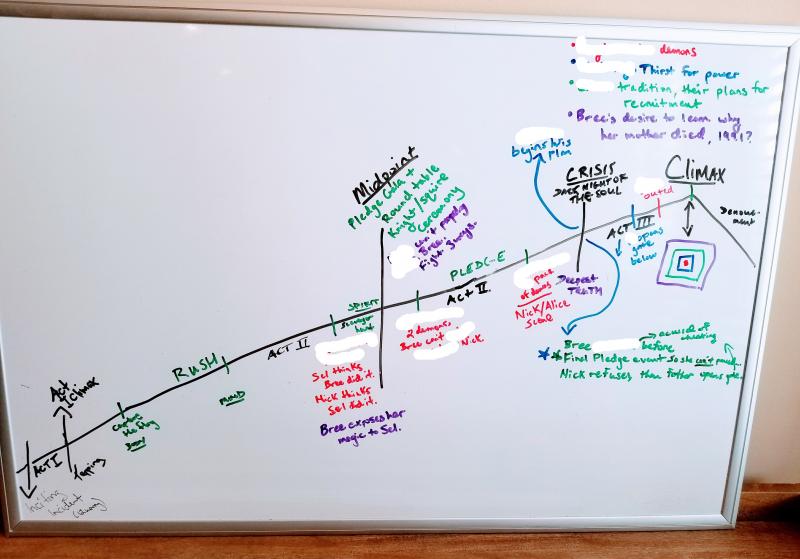 CR: How do you manage to keep the big secret so long? There’s barely even a hint or foreshadowing! In fact, we felt like there was a cunningly planted distraction, and yet enough seeds were planted that it is absolutely believable when it happens. Did you have some kind of amazing system to keep track of all the plot lines and planted seeds?

TD: I knew what the big twist was going to be from the start, so in some ways it was easy to plant seeds, but in other ways that made it very hard not to spill the beans early. I had to keep reminding myself of Bree's perspective and what she would know at any given time, and make notes of each bit of info gained and revealed in each chapter. Bree is very clever and inquisitive, so it wouldn't be believable for her to not to ask smart questions, but sometimes information doesn't come to you because you aren't asking the right questions. The trick was to keep her moving forward believably, but not in a straight line to the reveal. As for the nature of the big ending and the seeds related to it, I felt it was most important to build those into the atmosphere of the book and Bree's interactions with other people, so that it would be easy to see in retrospect how what happened in the past was entirely plausible and supported by the earlier information in the book.

CR: I just have to say how much we love William’s post-it notes (that he leaves on Bree’s forehead so they are the first thing she sees when waking from injury), and we want to ask if that is based on an experience? It adds such a note of sweetness and humor.

TD: I love William so much, and really love this detail. The designers at Simon and Schuster have made his trademark post-it notes into actual sticky note images in the book and it's such a nice touch. While I've never had post-it notes left on my forehead (sadly!) I do know there's something entirely heartwarming about waking up to a thoughtful note that has been left behind for you. William is a thorough healer and friend; he never wants Bree to feel ignorant of her own physical condition, or be left unaware of what has been done to her while she was unconscious. It never even occurred to me that William would put a note on a bedside table or something inanimate. He has a wry sense of humor and he's almost aggressively kind--of course he'd just stick it on her head!

TD: The Grey King! Hands down! It's the fourth book in The Dark Is Rising series, so by the time you get there you're quite deep into the lore Cooper has developed and she takes the magic further and deeper. The Grey King is set in Wales and here's where we really dig into the Arthurian background of the story world. This book explores some of the darker sides of humanity, as well as the harsh consequences brought about by both the Light & the Dark sides of magic, which is rich territory to me as a writer. It's also when we meet Bran Davies! He is not only my favorite character in that series, but he is probably one of my favorite characters in all of literature. In Legendborn, Nick's last name (Davis) is a nod to Bran.

CR: Your Merlins are so very different to those in other Arthurian retellings (The Once and Future King, The Dark is Rising)—what inspired you to plant a seed of darkness within the most powerful mages? And as for Isaac...

TD: Yes! I knew that the Merlin I imagined was much bigger than a single character—and that depictions of him had sort of been done to death. I wanted something fresh and more inclusive, so that anyone with any body or gender could hold that position in the modern world. One day it occurred to me that the idea of "Merlin" was so big to me, it could be another name for a mage, and a title. As for the Merlins' background in Legendborn (spoiler alert!) that particular seed was actually already in the mix for the original Arthurian Merlin character! In some stories, he is a cambion with a human mother and incubus father, and I felt that this hadn't been explored nearly enough in any of the stories I read. And Isaac? Well...let's just say I love writing him and pushing that lineage to an extreme! 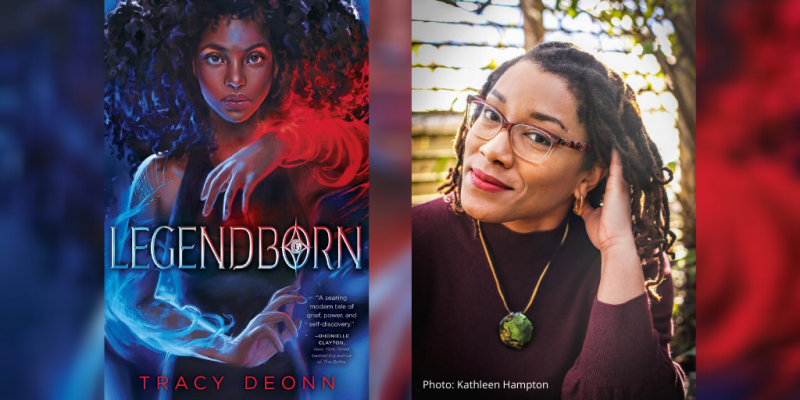 CR: When is the next in the series coming out?! We love that this book has a completeness to it, yet leaves SO MANY questions and we want to keep reading!

TD: Book 2 is currently underway! We haven't announced the release date just yet, but I'm hoping we will be able to soon.

CR: Your author bio calls you a “second-generation fangirl.” Please tell us what you mean by that!

TD: One of the ways I feel most connected to my mother is and was through our shared love of fandom. She was a fangirl from the early 60's and collected comic books with her brother as a teen while watching classic sci-fi TV. She even geeked out about Return of the Jedi in my baby book! I grew up watching Star Trek and Star Wars with her and staring longingly at her science fiction and fantasy-filled bookshelves, so the SFF genre has always been around me. In more ways than one, I wouldn't have the career and passions I have without her influence, so it's an homage to her! 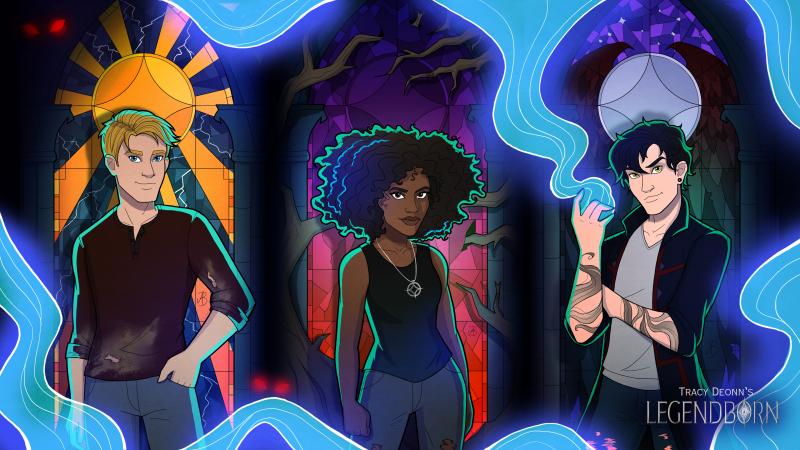 Filled with mystery and an intriguingly rich magic system, Tracy Deonn’s YA contemporary fantasy Legendborn offers the dark allure of City of Bones with a modern-day twist on a classic legend and a lot of Southern Black Girl Magic