Beloved Paleo blogger (Nom Nom Paleo) and cookbook author Michelle Tam has a new (fabulous!) cookbook, READY OR NOT! This shiny new book is chock-full of great recipes, information, and unique cartoons created by her husband, Henry Fong. Whether you're new to Paleo or an avid Nomster, READY OR NOT! is an awesome addition to your kitchen. Seriously, look at it - it's amazing: 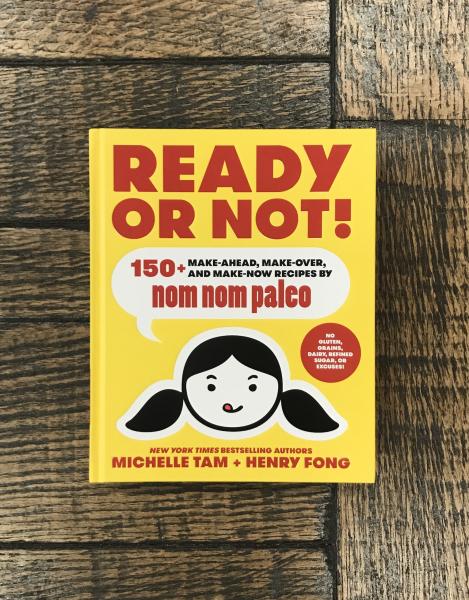 We were lucky enough to ask Michelle a few questions about the Paleo diet, life as a food blogger, and cooking with her family.

Without further ado, we're handing the mic over to Michelle:

How did you get introduced to Paleo?

In 2009, my husband Henry embarked on a mission of his own to improve his fitness, and stumbled upon the Paleo diet. At first, he and I shared a good laugh about it. No heart-healthy whole grains? No beans? Ha! How utterly stupid! But the more my husband looked into ancestral eating, the more he became convinced of its effectiveness. He gradually transitioned to a Paleo dietary template, while I sat back and scoffed. I knew better—after all, I’m the one with a nutrition degree!

To my surprise, however, he didn’t just survive on the Paleo diet—he thrived. My husband did CrossFit three times a week and ate Paleo, and was in better shape than he was in college. His blood work and body composition were much improved, and he was savoring all the stuff I secretly wanted to eat. Meanwhile, I was suffering through night after night of hour-long workouts and obsessively recording my calories, and I didn’t feel any healthier. My bathroom scale told me I’d shed some pounds, but my food cravings were off the scale.

I had to give this Paleo thing a try.

In the summer of 2010, I made the decision to go Paleo—and when I decide to do something, I commit all the way. I immediately cut out all grains, legumes, sugar, and processed food from my diet, and read everything I could about the science behind the Paleo diet. I quit doing all the crazy cardio and starting doing CrossFit. I was all-in.

And you know what? I feel great! After working graveyard shifts for more than a decade, I’d been mentally and physically lagging—but once I changed my diet, I found that my energy levels improved significantly, and my moods were sunnier, too. I was a nicer mommy.

Paleo’s the only approach that’s managed to improve my body composition and fuel me with enough energy to wrangle two young boys, cook for a houseful of hungry cavepeople, lift heavy(ish) stuff in the gym, maintain a food blog, and write cookbooks!

When did you start blogging at Nom Nom Paleo?

Is there a story behind the name Nom Nom Paleo?

Henry glanced over to me. “Really? What would you call it?” he asked.

“You know—the noise when you make when you’re eating something incredibly mind-blowing, and you’re scarfing it down like nomnomnomnomnomnom!”

What's your favorite recipe from READY OR NOT?

Ollie’s Cracklin’ Chicken, roasted broccoli, and vegetable soup (made in an Instant Pot). I’m a big fan of utilizing different cooking methods to get food on the table fast!

Your cartoons truly set you apart from other bloggers. How did you come up with the idea to use cartoons?

Henry does all the cartoons, photos, and design for our books and blog. He’s super creative and has been drawing me in cartoon form since we were in college in the early 90s. The first incarnation of Mini Michelle was a snarky girl named Mei Mei in the Dorkboy comic strip. It was a weekly cartoon that Henry drew for The Daily Californian, the UC Berkeley school newspaper.  I’ve always loved cartoons and it’s a great way to make the Paleo approach fun, accessible, and family-friendly.