A Peek Inside the Villain-Loving Mind of Soman Chainani

Soman Chainani is the man behind the New York Times-bestselling series The School for Good & Evil. The six-piece fairytale saga has already been translated into 25 languages, and the fourth installment isn't even out yet. Better still, the first book will soon hit the silver screen, courtesy of Universal Pictures. Lest you think that the movie will be worse than the book (they usually are), worry not—Soman is co-writing the screenplay and has an MFA in film. SGE is in good hands.

We were delighted at the opportunity to ask Soman a few questions about his work. Read his answers below, then pre-order your copy of Quests for Glory on our website. (Or wait until it comes out on September 19, and pick it up in person.) Most importantly, mark your calendars for September 26—that's when Soman is visiting the store. He'll chat, answer questions, and sign copies of his new book. You don't want to miss it.

When you set out to write your series, did you choose to write for middle grade readers? If so, what made that age group seem right to you?

Not really, to be honest. Fairy tales are the rare stories that transcend every age group, every era, and have a universal significance. I set my goals high. I wanted The School for Good & Evil to feel like the fairy tales of old, where young readers could read them for the fast-paced story, but older readers—and adults—could see all the subtext and symbolism bubbling under the surface. That said, as I go on in the series, each book definitely gets more sophisticated and mature, since the kids are getting older in each one.

You once said, “there are stereotypes that show up repeatedly in the portrayal of villains and clichés that dominate the oppositions between Good and Evil, Boy and Girl, and Old and Young. By writing my own series, I hoped to break down these clichés and tell a new story that didn’t depend on obvious tropes.” Can you give a favorite example or two of some decisions you’ve made in your stories that were geared towards breaking down gender clichés? 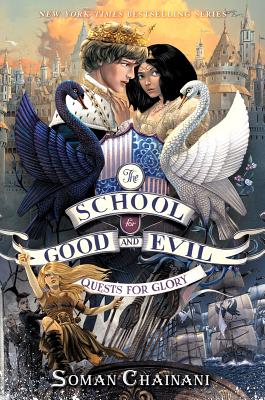 I've always believed that the secret to understanding those different than us is to very viscerally imagine being in their shoes—if you study neurology, you learn that the brain has a very hard time discerning real life experience from something imagined in precise detail. So when writing Book 2, A World Without Princes, I wondered what it would mean to have a world where boys could take a potion to change into girl versions of themselves and vice versa. What would that do to their perceptions of the opposite sex when they reverted to their original gender? I knew I'd get plenty of pushback from the usual gatekeepers, since it's a pretty provocative idea for middle grade, but the idea felt like something kids and teenagers would love to read—because that's what fantasy is about; getting us out of our mundane experiences and forcing to use the outermost fringes of our imagination. And as a result, we come back to reality with a greater sense of the magic within it.

Which Brothers Grimm fairytale is your favorite, and why?

Hansel and Gretel is my favorite—because it feels so deeply real in its threat. Gretel has to survive a terrifying situation and save her brother, with poise, skill, and wit. I also love that witch in the story: she’s just incredibly clever. She wants to eat children—so to lure them she builds a house out of what they eat.

This is only the first book in your second trilogy, but do you already know how the entire saga will end?

Not necessarily. I trust my brain and subconscious to find the perfect ending when I get there. I'm not a big believer in conscious planning -- I think my subconscious and imagination is far more powerful than my cerebral brain and I've always trusted it to take me where the story needs to go. I firmly believe that's why SGE has so many surprising twists and turns; I'm surprised the same way the reader is. So we'll see how things end.

What’s currently on your bedside table?

A bottle of perrier and the eye-mask I use for sleeping.

Which is your favorite of your traits?

I'm pretty tough; nothing really gets me down.