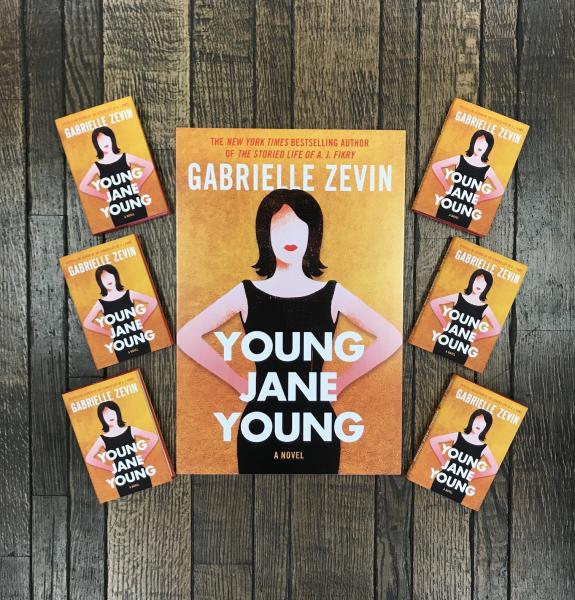 You've heard of Gabrielle Zevin. She wrote The Storied Life of AJ Fikry, a runaway best-seller and Blue Willow staff favorite, plus a host of other well-loved novels for teens and adults. Her new book, Young Jane Young, is whip-smart and seriously funny. It's also the perfect book club choice – much to consider lies within these pages.

We can't wait to welcome Ms. Zevin back to our store on September 9. She's a frequent visitor. This will be her fourth stop over the last ten years, and we're utterly delighted to be the only bookstore to host Ms. Zevin on all four of her book tours.

We caught up with Ms. Zevin earlier this month for a short Q&A about her new book. Read her thoughtful answers below, then swing by the store or place an online order for your own copy of Young Jane Young. After all, you'll need something good to read when Harvey hits us this weekend.

Young Jane Young is a feminist, political novel — and a well-argued rebuttal to slut-shaming. Why this topic?

Thank you! Women are 51% of the population, and yet we have just under 20% of the seats in Congress. The state where I live, California, and the state where I was born, New York, have never had a female governor. My grandmother was born into a country where she could not vote. When I think about these facts, I don’t think it’s that astounding that we did not elect the first female president last November. As a nation, we are not used to voting for women for anything. I wrote Young Jane Young because I wanted to explore the reason women do not seek or achieve higher political office in the same numbers that men do. So on some level, slutshaming as a topic was a byproduct of trying to honestly answer this first question. One of the things I concluded was that slut-shaming imposes standards of morality on women that tend to eliminate them from running for office. Slut-shaming imposes standards of conduct on women that it does not impose on men.

What kind of research did you do to explore the phenomenon of viral slut-shaming? Did you correspond with Monica Lewinsky or other victims of similar hate crusades?

Here’s a funny story. I try to avoid being online too much, but I put up a plot description of Young Jane Young on social media. The description included the fact that Aviva, a 20-year-old, has an affair with an older, married man. Most of the people said they were looking forward to reading the book, but a few of them said things like, “Boy, Aviva sounds like a dumb girl.” My point is, people can’t even bear a fictional “fallen” woman. People will slut-shame a fictional character. And without even having read the book!

Jon Ronson’s book, So You’ve Been Publicly Shamed, was a great resource for me. He delves into some of the most famous internet shaming stories, if not particularly slut-shaming stories. I think Jon Ronson is one of the most entertaining non-fiction writers around.

No, I did not correspond with Monica Lewisnky. Based on her Ted Talk, she seems like a very intelligent woman, and I think it would be interesting to know her.  I would hope that if she read the book, she would like it, but I feel I should also say, Aviva Grossman is not Monica Lewinsky. Other than the broad outlines, there are many differences between their stories. After I decided to write this book, I kind of avoided reading too much about Monica Lewinsky. I waited until I was finished writing the book to read Andrew Morton’s Monica’s Story, for instance. I wanted Aviva to be a character in her own right and not just a fictional Monica Lewinsky. As an aside: I would be first in line to read a memoir by Monica Lewinsky.

Which books would you recommend to readers who love Young Jane Young?

Where’d You Go Bernadette by Maria Semple
Heartburn by Nora Ephron – The voice of Rachel, Aviva’s mother, was partially inspired by this novel.
All Grown Up by Jami Attenberg – I loved this book’s economy and voice when I read it this past spring.
Black Water by Joyce Carol Oates – I read this book in college. It’s Joyce Carol Oates' take on Chappaquiddick.
Mrs. Dalloway by Virginia Woolf – I thought of this book when I was writing the section with Embeth, the congressman’s wife.
The Interestings by Meg Wolitzer
The Human Stain by Philip Roth
Election by Tom Perrotta
My Name Is Lucy Barton by Elizabeth Strout
So You’ve Been Publicly Shamed by Jon Ronson

I’m excited to read Hilary Clinton’s book when it comes out this fall, too. And if you can wait until next year, Tayari Jones’s An American Marriage is excellent.

What are some of your favorite feminist titles?

Online, I have a real appreciation for Jennifer Weiner. She is brave and relentless, and I love that.

The Storied Life of AJ Fikry
The Hole We're In
Margarettown

Elsewhere
Memoirs of a Teenage Amnesiac