Eliot Schrefer on the Animal Kingdom, His Stonewall Honor, and QUEER DUCKS

Friends, we can’t wait to share the new book for teens (and up!) from National Book Award finalist Eliot Schrefer with you all. It’s called Queer Ducks, and it delves into the fascinating world of animal sexuality with humor, wit, and smarts. It’s an absolute treat to read — take it from Blue Willow Events Coordinator and Children’s Specialist Cathy Berner, who says, “The engaging format that combines scientific research, comics, and memoir made me feel like I was sitting next to Eliot in science class, passing notes and comics back and forth — and then going for coffee afterwards!”

Cathy caught up with Eliot before the book’s launch to talk about Queer Ducks, Eliot’s recent Stonewall honor, and more. Check out their conversation below, then save the date for Eliot’s virtual launch event on May 24. He’ll appear in conversation with Newbery medalist Kelly Barnhill, and it’s sure to be a conversation you won’t want to miss!

Cathy Berner: Eliot Schrefer, congratulations on Queer Ducks and thank you so much for joining us on the blog! Tell us a little bit about this project and how it came about.

Eliot Schrefer: Thanks for having me! You know what a big fan I am of your store.

Queer Ducks takes stock of the last two decades of research into the huge diversity of animal sexuality and sexual identity, looking at bisexual bonobos, male sexual unions in bottlenose dolphins, sex-changing fish, intersex deer, you name it! Along the way we raise questions like how our erroneous “Noah’s Ark” perception of animal sexuality came to be, what effect that perception has had on discrimination against LGBTQIA+ people, and theories about why evolution allowed room for non-procreative sex in animals. All told with humor and stories and some cool comics from Jules Zuckerberg.

ES: One of the primary qualities I love in humans is curiosity about others. I value people who ask questions and listen deeply. Deep listening… if you take that quality to the extreme, it’s about getting beyond human concerns in general, and trying to work against the instinct to concentrate on our needs, our desires. We’re just sort of narcissistic as a species, and the natural world has really suffered as a result. I think books—especially books for young people—can be a nice corrective to all that! Plus, it just calms me to think about animals. Day-to-day concerns feel a little less urgent in the context of the broader natural world.

CB: We love Jules Zuckerberg's wonderful comics in Queer Ducks. What was it like to work with Jules, and did you always plan for the book to have a visual component?

ES: Aren’t they great? What I love about Jules’s art is how it looks like notebook doodles (granted, from a VERY talented doodler). I wrote up scripts for the comics, with the concept that an animal GSA is meeting after school, and each animal takes a turn introducing him/her/themselves at the opening of each chapter. Jules took that idea and ran with it! I think my favorite is the bull, who’s slowly realizing before our eyes that all the artificial insemination that the cattle industry does might not be up his alley after all.

CB: The book beautifully weaves together the illustrations, personal anecdotes, and scientific interviews. It’s so seamless, but sounds like a lot of work! How did you strike that balance from a writing and an editorial perspective?

ES: I kept thinking of the 11-year-old me, who realized he was gay and felt wrong and weird and loathed for it. What would I want him to know? What would I tell him so he felt heartened and encouraged and also seen and loved and cared for? In a way, the tone of the book is a direct address to that young reader. I assume they bring curiosity and wonder to the table, and that they might also be going through a hard time and could use some sympathetic adult guidance.

The chapters were a little tricky to parcel out, because the number of animal species with scientifically validated same-sex behaviors is 1,500 and counting! Which ones should I concentrate on? I picked a variety of animal types (invertebrates/invertebrates; land and aquatic; winged and hoofed), and also decided that each animal example would tackle one of the important questions in the field. The Japanese Macaque chapter, for example, looks at female-female sex in monkeys, but also the rise of feminist biology, and addresses why there’s so much more writing in zoology about male sexual choice than female sexual choice.

CB: We love Queer Ducks and think that it’s a wonderful, valuable non-fiction resource. We’re curious: What fiction books would you pair with it?

ES: Ooh! What a fun question. I might pair it with the one of the new wave of children’s literature books that put animal rescues alongside concerns of human justice, like Margarita Engle’s new novel-in-verse, Singing with Elephants. Or an adult novel like Laline Paull’s The Bees, which attempts to enter another animal’s consciousness. Or maybe a wordless picture book set in the natural world, like one of April Pulley Sayre’s gorgeous works (I guess that’s technically a non-fiction example, but I hope you’ll let me get away with it).

CB: Finally, before you go, we wanted to congratulate you on your Stonewall honor for The Darkness Outside Us! We were just thrilled. How did it feel to get that news?

ES: Thanks so much! The Stonewall committee wanted to tell me on Zoom, but didn’t want me to know what the Zoom was about, so my otherwise honest and forthright editor (Ben Rosenthal) had to go through some major subterfuge to get me on a video call on the Sunday afternoon before the official announcement. He said the ALA committee for intellectual freedom wanted to speak to me. So I was all ready to talk about my censorship experiences, and instead the Zoom was about the very opposite of censorship. I was floating for hours afterwards.

Thanks so much for having me, Blue Willow, and for all you do for children’s books! I love your store so much and look forward to the day I can come back and visit in person 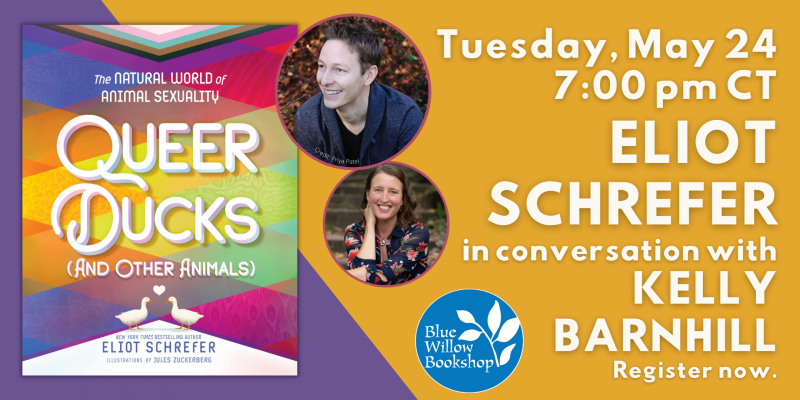 Queer Ducks (and Other Animals): The Natural World of Animal Sexuality (Hardcover)

NPR's "All Things Considered," calls Queer Ducks "teenager-friendly. It's a young adult book filled with comics and humor and accessible science, and it's filled with research on the diversity of sexual behavior in the animal world."