If you’ve been shopping at our store for a while, you know we have a special place in our hearts (and on our shelves) for “Uncle” Rick Riordan, whose magical, mythology-infused middle grade novels have been delighting readers for fifteen years. When he’s not writing his own books, he’s busy with his own imprint, Rick Riordan Presents, which is publishing some of the funniest, most thrilling, and exciting middle grade series today.

We caught up with Stephanie Lurie, the Editorial Director of Rick Riordan Presents, to chat about working with Uncle Rick, children’s publishing, and what’s coming next from the imprint—starting with The Last Fallen Star, by Graci Kim. We’re delighted to host the launch event for that book on May 4, when author Graci Kim will appear in conversation with Rick Riordan himself. You can learn more about that event on our website, and purchase tickets here. In the meantime, check out our interview with Stephanie below!

Tell us about Rick Riordan Presents. How did the imprint come into being, and what kinds of books do you publish?

Rick has always been generous about posting reviews of other authors’ work, to give their books a boost, so Disney invited him to start an eponymous imprint through which he could launch new talent. At first he said he was too busy to consider the prospect, but after further thought he came back to us with the idea of making it an imprint devoted to mythology-based middle grade novels, like the kind his fans enjoy, but written by authors who want to tell stories from their own heritages and backgrounds. And lest anyone think that cultural mythology is too narrow a focus to sustain, Graci Kim’s The Last Fallen Star will be our sixteenth book, and we have many more signed up for the future. We publish in a variety of genres, from fantasy adventure to sci-fi to humor, and we will be soon expanding into young adult fiction and graphic novels.

Can you share a bit about your path in publishing? Also, is it true that you're the editor who acquired Andrew Clement's Frindle?

Children’s book publishing is all I’ve ever done, beginning when I was an editorial intern while a senior in college forty years ago (gulp!). I grew up at Little, Brown; ran an imprint at Simon & Schuster (where, yes, I was lucky enough to acquire Frindle); and was the president and publisher of Dutton Children’s Books at Penguin before I moved to Disney Hyperion in 2008. I started working with Rick after his original editor, Jen Besser, left the company, and the first book he and I collaborated on was The Throne of Fire, book two of the Kane Chronicles. It wasn’t until the Magnus Chase series that I started embarrassing Rick by being part of his warm-up show on tour—hahaha. The last decade+ of my career has really been incredible.

We’re so excited for The Last Fallen Star by Graci Kim. Can you talk about that book and its journey to publication?

Speaking of incredible, when assistant editor Hannah Allaman shared the first draft of The Last Fallen Star with me, I was blown away by debut author Graci Kim’s magic system. It was so well-conceived and inventive! There are many ways for readers to engage with the story, whether it is through adoptee Riley’s desire to fit in with her family’s Korean witch clan, or her quest to save her beloved sister, or the mystery of what the last fallen star is, or the encounters with fantastical creatures, or the delicious descriptions of food, or all the above. I was very sorry to lose Hannah to a competing publisher, but it was a delight to see the book through with Graci, and we’ve signed up two more in the series. 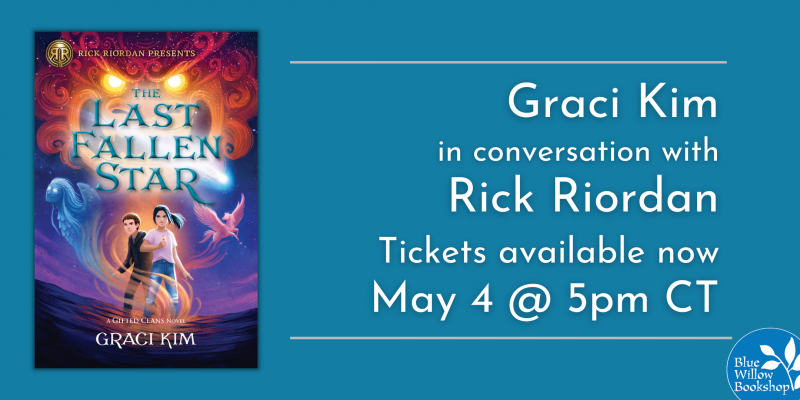 The Rick Riordan Presents books center mythologies from all over the world. How are those mythologies chosen? Does a book begin with the author or the mythology?

We don’t have a checklist of mythologies we want to cover; we respond to pitches that come in from agents and we also approach authors we’d like to work with, as was the case with Carlos Hernandez, Rebecca Roanhorse, and Sarwat Chadda. If a pitch (often just a paragraph) sounds intriguing to Rick and me, I’ll work with the author on a three-chapter sample and synopsis. Once that material passes muster with Rick and my editorial colleagues, it goes to the acquisition board, which is made up of people from sales, marketing, and publicity.

What else can we look forward to from Rick Riordan Presents this year?

We have many treats in store! In August, we’ll be publishing the second book about Paola Santiago, entitled Paola Santiago and the Forest of Nightmares. Having just faced the fearsome La Llorona, Paola answers another ghostly summons and is reunited with her long-lost father. But he isn’t the man she thought he was. . . .

In September we’re introducing Lori M. Lee’s Pahua and the Soul Stealer, about an eleven-year-old Hmong girl who sees spirits all around her, including a sarcastic talking cat. When Pahua accidentally unleashes an angry ghost, it steals her brother’s soul, and she has to track them down in the spirit world. Along the way she discovers a heritage that has been hidden from her all her life.

Also in September we have The Cursed Carnival and Other Calamities: New Stories about Mythic Heroes. This is an anthology featuring a rollicking new story by each RRP author plus one from Rick himself! It’s the first time he’s written about Irish mythology.

October will bring the last installment in the Tristan Strong trilogy, Tristan Strong Keeps Punching. Tristan is back in our world, but his friends from Alke are scattered all over the place and he feels responsible for finding them. His old nemesis, Cotton, is going to distract him from that task, however. Will Tristan finally knock out the haint once and for all? 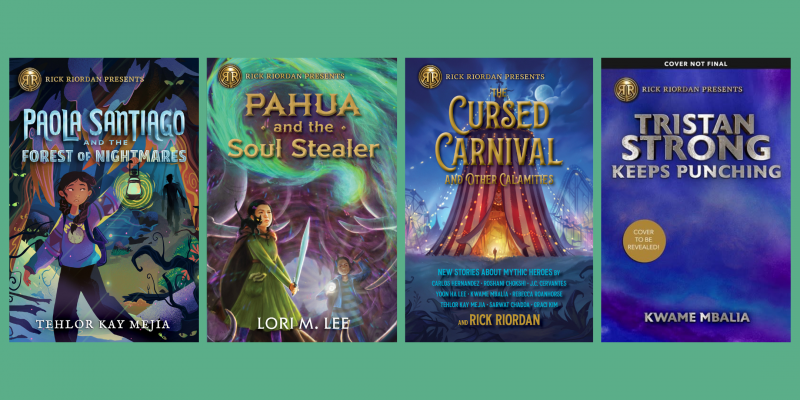 Since you work with so many authors on an ongoing basis, how do you keep their voices distinct in the editorial process?

If the author doesn’t have a distinct voice to begin with—no matter how cool their concept sounds—their book won’t stand out in the imprint or the marketplace. That’s why voice is the first thing we look for in the writing sample. Another important element is tone—that snarky brand of humor that Rick’s fans have come to love and expect. I can help authors with the logic and structure of their story, with character development, and with the polishing of prose, but I can’t teach someone to be funny or to understand the teen perspective if they don’t already.

Time for a silly one: What’s a fun fact about Rick that not everyone knows?

Rick has been trained in scuba diving, and here’s a photo to prove it. This is also a nod to his upcoming novel, Daughter of the Deep, which was recently announced. It’s his unique take on Jules Vernes’ 20,000 Leagues Under the Sea. 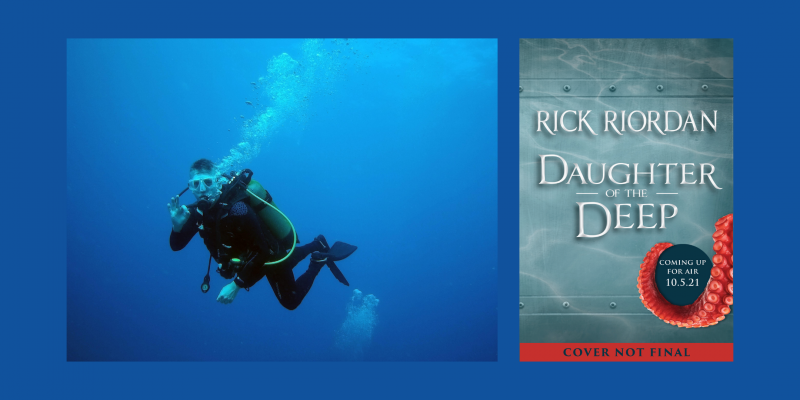