Author and illustrator Brenden Wenzel, who was awarded a Caldecott Honor for his gorgeous picture book They All Saw a Cat, loves planet earth. You can sense that the moment you pick up one of his books—each of Wenzel's works, from his collaborations with other authors to his solo outings, shines with his awe of the natural world. That's especially true of Hello Hello, his latest picture book release, which celebrates the majesty and diversity of some of our planet's most critically endangered species. A staunch environmentalist, Wenzel is using his considerable skill to inspire kids and change the world.

We can't wait to welcome Brendan Wenzel to the store on Wednesday, March 21 to hear more about his process and inspiration. In the meantime, check out his thoughtful answers to our questions in the Q&A below.

Can you tell us a bit about your journey to publication, both as an illustrator for other authors and as an author/illustrator? 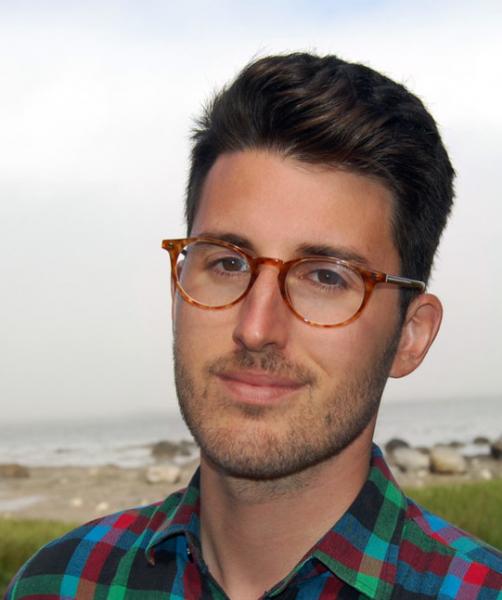 I’ve always had a fascination with the natural world and wildlife, and art has been a fantastic outlet for exploring those interests. I started making books in the first grade and it’s been full steam ahead since then. I went to art school, drew many animals, graduated, and then worked for several years doing odd jobs, including working as a deckhand on a submarine (a museum, not an operational vessel). During that time I continued to develop book dummies, which were not particularly great, but an important step in the process of figuring out the kinds of stories I wanted to tell.

My break came from a series of images I created of threatened species from Southeast Asia, where I used to live.  Perhaps due to the unique subject matter, the images ended up on a number of different blogs around the internet. One of the people who came across them was the fantastic author Angela Diterlizzi, who thought my style of illustration might work for a manuscript she was developing at the time. That book ended up being Some Bugs, my first published work as an illustrator.

I love working on other people’s books and the challenge of attempting to bring an author’s world to life. I always seem to come out the other side with a broader perspective. I also knew I wanted to tell my own stories and explore my interest in the natural world, and what animals meant to me.  This was the idea in my head when I jotted down the initial lines to my first book as author and illustrator, They All Saw a Cat.

We know from your work that you are an ardent conservationist. What led you to that interest and passion?

Jane Goodall has always been one of my heroes, and it was probably her work that originally familiarized me with the idea of wildlife conservation as a kid. As someone who loved animals, I was passionate about conserving and protecting wild places and creatures, but I wouldn’t really begin to understand the importance of this world until many years later.

My passion for conservation as an adult, and my occasional collaborations with conservation groups, took shape when I lived overseas in Vietnam.

When I first arrived in Vietnam in 2009, every tour operator in the bustling backpacker district prominently displayed a photograph of the Vietnamese Rhinoceros, a subspecies of the Javan Rhinoceros, found in Cat Tien National Park, a few hours drive from Ho Chi Minh City. What I did not know at the time was that the individual in that photograph was one of the last of its kind. Roughly a year later, a poacher ended the life of the last Vietnamese Rhino, perhaps less than one hundred miles from where I slept.

Until this moment, the story I had told myself about extinction went something like this: Species had gone extinct before, but that was years ago. The disappearance of creatures like the Dodo and Passenger Pigeon were cautionary tales which unfolded before modern science and the global news cycle. Yes, the world had a number of endangered animals, but humanity always stepped in at the last minute—hopefully a bit sooner—and saved the day.

In April of 2010, I lost that story. An animal that had lived in the forests of Southeast Asia for hundreds of thousands of years, foraging in the undergrowth and rolling about in mud wallows at the same time mammoths and saber-toothed cats wandered the distant planes of North America, vanished forever. Extinction was very real.

The loss of the Javan Rhinoceros changed everything for me. I had not paid attention and I was not alone in this. One of the most disturbing things about the disappearance of the species was how little attention it really got. It was not the top headline in the news of day. It suddenly felt very important to take notice.

I began to read everything I could about the creatures of the region—not only the iconic animals like the Tiger, but also creatures like the ant-eating Sunda Pangolin, and the secretive hoofed mammal the Saola, sometimes called the Asian Unicorn. Both species were fascinating, and also critically endangered.

My interest eventually took the shape of a series of illustrations featuring the animals I was learning about. I created the images both to educate myself and to share these species with those around me. To my surprise, the illustrations, which I posted on my website, began to find their way onto a number of blogs and also into a magazine article about conservation in Vietnam. Soon afterwards I began to get emails from folks in the region who were working in wildlife conservation. I was thrilled.

Since then, I have had the privilege to lend my skillset to many groups working to protect wild places and creatures, including TRAFFIC, Flora & Fauna International and the Wildlife Conservation Society.

I hope to find new ways to highlight threatened species in the coming years and to collaborate with the  folks working to ensure their survival.

How did you decide which animals to feature in Hello Hello? 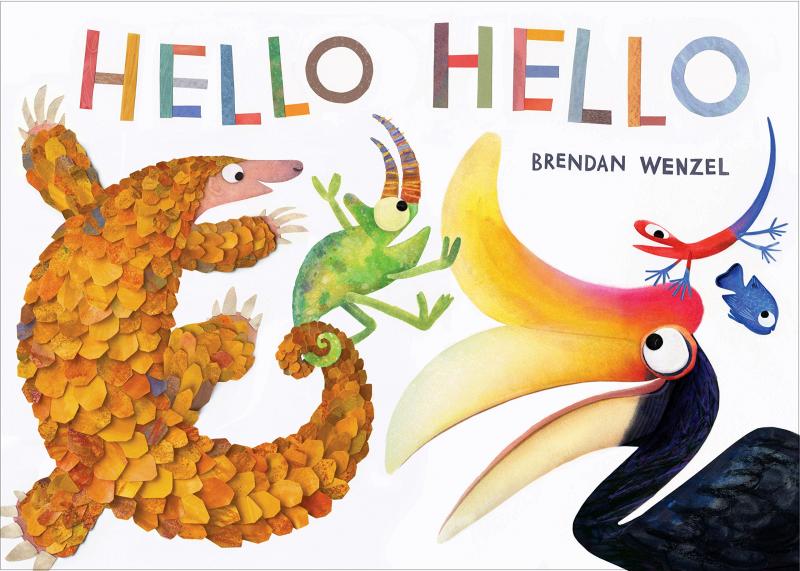 The first step working on Hello Hello was to create sprawling charts exploring the ways animals connect. Though these would always start simply, with one or two recognizable animals sharing a clear connection (ex. a black and white zebra and a panda bear), the images quickly began to branch, twist, and expand as more species made their way onto the page and relationships became more complex. The process was then to select the most interesting sequences. This was a chance to not only select visually exciting species, but also animals that held particular significance for me, like the Sunda Pangolin—which appears on the cover. The Pangolin, which is critically endangered due to excessive hunting, is a fascinating species, but pretty far from being a household name. This book was a great opportunity to shine some light on an animal that fascinates me, and that I also feel needs a spotlight on it.

What is your process? Do you paint, use cut paper, draw digitally, or something else entirely?

The answer is yes, yes, and yes. For this book I did a bit of everything. I approached each animal on an individual basis and tried to select the materials and process that would best communicate what the image needed to. To again take the example of the Pangolin, I used thick cut paper to create the animal’s armored scales, so that the texture felt tough and sturdy. Other animals I made with crayon or watercolor. Experimenting with various ways of creating the shapes, colors, and patterns that became the backbone of Hello Hello was one of the most exciting parts about working on this book. 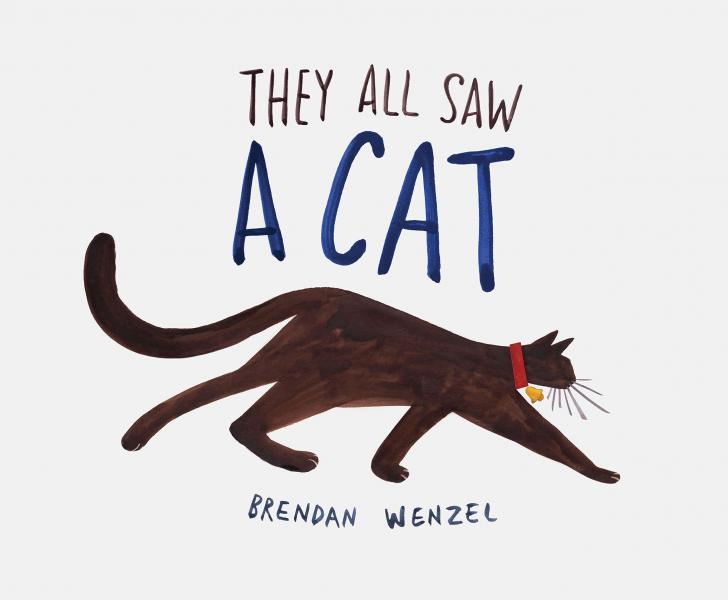 How long do you have? This is a question I have always struggled to answer in less than nine thousand words. The coolest answer would probably be to pick a rare mollusk. However, like many people, I have a soft spot for large, charismatic species.

One of the things that fascinates me about animals is their intelligence, and how differently they  process the world than we do. What are they thinking? is probably the question I wonder the most when watching animals in the wild. For this reason, elephants and dolphins are top of the list. I’ve had the pleasure of crossing paths with a couple species of both, and have walked away every time with wide eyes and thousands of questions. I’ve read quite a bit suggesting we have only begun to understand the incredible ways these creatures communicate and experience their world, and I believe it.

The other animals I’d like to mention are Southeast Asia’s two surviving Rhinos, the subspecies of Javan Rhinoceros found on Indonesia and the Sumatran Rhinoceros, which is sometimes known as the Hairy Rhinoceros. Both are critically endangered. Rhinos are easy to love. They are both tough and graceful. Curious and a bit jumpy. For me they are a charming reminder that without our help, there is no guarantee that future generations will know many of the most unique and fascinating species that share our world.

Named a Best Children's Book of the Year by The Washington Post, Amazon, Working Mother and more: A new picture book from Brendan Wenzel, the New York Times bestselling and Caldecott Honor-winning author of They All Saw a Cat!

Hello, Hello! is an interactive book for kids.

Cynthia Rylant and Brendan Wenzel explore the beauty and tenacity of life.

There are so many wonderful things about life, both in good times and in times of struggle.

Get the buzz on bugs in this picture book from Angela DiTerlizzi!

Grab your magnifying glass!
Find your field guide!
And come hop, hide, swim, and glide
through this buggy backyard world!

Featuring insects including butterflies and moths, crickets and cicadas, bumblebees and beetles, this zippy rhyming exploration of backyard-bug behavior is sure to have insect enthu